Will Fed Actions Prompt a Recession?

After the end of the Great Recession, short-term rates were held to zero percent by the Federal Reserve Bank in attempts to boost economic growth through borrowing and spending.  Since December 2015, the Fed has raised short-term rates nine times hoping to keep the economy from overheating, and to quell inflation. However, according to economist Gary Shilling, post-World War II history shows that in 12 of 13 instances of rate hiking campaigns, a business downturn followed.  And now some believe the interest rate hikes have been more about providing room for future rate cuts in the event of a recession, rather than worries over inflation or an overheating economy. Please proceed to The Details for my thoughts as well as for quotes from other economists on whether the Federal Reserve Bank is prompting a recession.

As discussed in my January 15 newsletter entitled, “Are Interest Rates Going Up?”, the Federal Reserve Bank (Fed) controls short-term interest rates through the Federal Funds Rate (FFR). Panic-stricken after the Great Recession, the Fed eventually adopted ZIRP or Zero Interest Rate Policy in which the FFR was effectively lowered to zero percent. Although the recession officially ended in June 2009, ZIRP was kept in place until December 2015. Six and one-half years after the end of the recession, the Fed embarked on a gradual series of rate hikes. Recent stock market turmoil and dismal global economic results have now given the Fed pause. 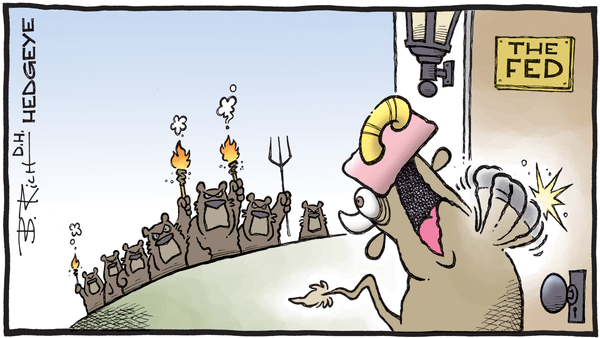 Last year the Fed implemented four FFR rate increases of 0.25% each. The last increase marked the ninth such move and put the FFR at a target range of 2.25% to 2.50. Early in 2018, many investors expected three more rate hikes in 2019. However, as of the December 2018 FOMC (Federal Open Market Committee) meeting, officials now project two hikes for 2019. Some investors are now anticipating no rate increases in 2019. The official FOMC statement indicated, “The Committee judges that some further gradual increases in the target range for the federal funds rate will be consistent with sustained expansion of economic activity, strong labor market conditions, and inflation near the Committee’s symmetric 2 percent objective over the medium term.”
The Fed has effectively painted themselves into a corner, leaving little room to cut rates during the next recession. Many surmise the rate hikes of late have more to do with providing future runway for rate reversals, than with actual inflation fears.
In a recent INSIGHT newsletter, economist Gary Shilling provided a list of 13 forerunners to recessions. See chart below. 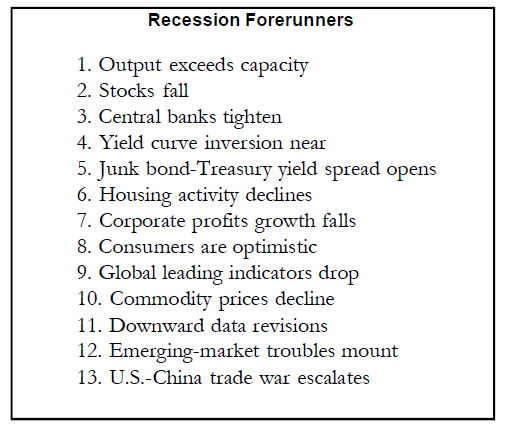 Gary believes a recession is looming. He recently wrote: “None of these yet guarantee a recession and, besides, the time between their signal and the start of an economic downturn can be long or short. But, collectively, they make a strong case for an economic slump.”
Notice in the list above, number 3 – Central banks tighten. As stated above, the Fed has already bumped rates nine times since December 2015. Additionally, the Fed is now allowing bonds purchased with “printed” money and sitting on their balance sheet, to roll-off at maturity. This is currently being done to the tune of $50 billion per month. Taken together with rate hikes, it is safe to say the Fed is tightening.
Gary further explained, “As business expansions wear on and the unemployment rate falls, the Fed worries about an overheating economy and begins to raise interest rates. The central bank aims to cool off the economy, not precipitate a recession, but in 12 of 13 instances in the post-World War II era, by our count, a business downturn followed. The only soft landing was in the mid-1990s, and we define a soft landing as occurring when the Fed reverses a credit tightening campaign. Until then, you don’t know that their series of interest rate increases is over.”
This Wednesday will be a busy day for Wall Street. In the morning, the advance reading of fourth quarter GDP growth will be released. Most pundits are expecting a growth rate somewhere between 2.5% and 3.0%. Hedgeye Risk Management, LLC, on the other hand, is expecting a much slower growth rate below 2%. In the afternoon, the Fed will announce whether they are hiking rates. I suspect if the GDP growth rate comes in unexpectedly high, the Fed will have pressure to raise rates. However, considering previous statements regarding rate hikes, I find this unlikely. If GDP growth surprises to the downside, rest assured the Fed will talk dovishly. If for no other reason, in attempts to keep the stock market from plunging.
In years since the Great Recession, bad news has been good news for the stock market, and good news was also good news. Bad economic news meant the Fed would keep loose monetary policy in place, and good news meant the economy might surprise to the upside. Will that be the case this time?
Economist John Williams, founder of ShadowStats.com, believes no matter what the Fed does, it is going to be a disaster. He stated in an interview withUSAWatchdog.com’s Greg Hunter, “So if the Fed continues to raise interest rates, which they want to do, and they still don’t have rates where they want them, it’s going to intensify the economic downturn. That’s going to hit the stock market. If they stop raising rates…and they have to go back to some sort of quantitative easing, that’s going to hit the dollar hard. Foreign investors are going to say the dollar is going to get weaker and let’s get out of the dollar. Then, you are going to see heavy selling in the stock market.”
As more evidence appears that both global and domestic economies are slowing, potentially heading into recession, the less likely the Fed will continue to raise interest rates. At what point the Fed discontinues its reversal of quantitative easing, known as quantitative tightening, remains to be seen. In any event, the slowing rate of economic growth, falling growth rate of corporate profits (on a rate of change basis), and current monetary tightening present real dangers for the stock market. The cycle appears to be turning.
The S&P 500 Index closed at 2,665 down 0.22% for the week. The yield on the 10-year Treasury note fell to 2.75%. Oil prices remained at $54 per barrel, and the national average price of gasoline according to AAA rose to $2.26 per gallon.
At Cremerius Wealth Management, portfolios are developed to take into account the state of the economy, market cycle and valuation, and relative strength. Our goal is long-term growth with limited downside potential.  If you need assistance with your portfolio, please give me a call. I would be happy to review your situation and explain how we can help you work towards achieving your goals.
Best Regards,
Bob Cremerius, CPA/PFS