Is the Fed Really Juicing the Stock Market?

The Federal Reserve Bank (Fed) has been implementing QE (Quantitative Easing) on and off for over a decade.  In implementing QE, the Fed purchases Treasury securities and Agency mortgage-backed securities (MBS) – not stocks.  Many believe the Fed is “printing money” when purchasing those bonds.  However, they are really swapping those bonds for “reserves” on the primary banks’ balance sheets.  One goal was for those banks to loan more money to customers, which would be used to purchase goods and services, thus increasing GDP.  However, that is not what has happened.  Notice the change in the Monetary Base (which includes “reserves”) versus GDP growth in the first graph below. (red line vs blue line.) The second graph also illustrates the majority of the QE created reserves remain in reserves, not in the money supply (green line) and therefore not in the economy.  So, while the Fed has assisted in fueling the stock market bubble by keeping interest rates near zero, they are not directly funneling cash into the stock market.  The extremely low interest rate policy has contributed to the attitude by investors that “there is no alternative” to stocks.  This has resulted in more demand for stocks, and many are even using margin debt to buy stocks.  Low interest rates have also encouraged corporations to buy their stock back with borrowed funds, creating more demand. See the quote from economist John Hussman explaining the stock market effect from QE is largely a psychological phenomenon.  For a more detailed explanation:

The answer to this question is “It depends.”  Is the Federal Reserve Bank (Fed) supporting the stock market through extremely loose monetary policy including keeping short-term interest rates near zero percent?  Absolutely.  But there is a large misconception by the vast majority of investors, and even advisors, that the process of QE (Quantitative Easing) is somehow funneling money directly into the stock market.  This missive might get a little technical, but I believe it is important for investors to at least get the big picture of what the Fed is doing and how it impacts the stock market.

During the Financial Crisis in 2008, the Fed increased their balance sheet by 2.5 times from around $900 billion to about $2.3 trillion.  Through a series of QE programs, the balance sheet exploded to $4.5 trillion by the end of 2014 – long past the end of the Financial Crisis and Great Recession.  During the period 2015 through September 2019, the Fed slightly reduced their balance sheet before reversing course during the pandemic as assets soared to the current level of about $7.8 trillion.  There is much confusion as to what this actually means, so I will provide a brief overview.

The Fed, in implementing QE, purchases Treasury securities and Agency mortgage-backed securities (MBS).  Additionally, during the pandemic, utilizing emergency provisions, they effectively partnered with the Treasury Department to purchase corporate bonds.  The purpose stated for these actions was to keep the financial markets liquid and functioning properly.  Another goal is to provide additional demand for these securities to keep their prices up and yields down.  One of the biggest misunderstandings is how these bonds are purchased and what happens to those funds.  I have even read misinformation in major financial publications regarding the functioning of QE.

Many people believe the Fed is “printing money” when they purchase these bonds.  In actuality, the Fed is crediting the “reserve” accounts at the primary banks from which the securities are purchased.  This balance adds to the banks’ “excess reserves.”  There is no “cash” generated by this transaction.  The bank is swapping an investment (Treasury security) for additional reserves.  These reserves become part of the Monetary Base which also includes cash and near-currency balances.  One intention was that banks would in turn make loans against these reserves thus creating new deposit accounts.  This “money multiplier” effect is how the Money Supply, often called M2 (which includes cash, demand, and time deposits, but excludes reserves) grows.  The new money (M2) can either:  be used to purchase goods or services, be invested or saved, or used to pay down debt.  The Fed’s goal was for QE -which increases the Monetary Base – to result in growing M2, hopefully to increase economic activity, thus increasing GDP growth.

Unfortunately, that is not exactly what has happened.  See the graph below prepared from the St. Louis Fed FRED database. 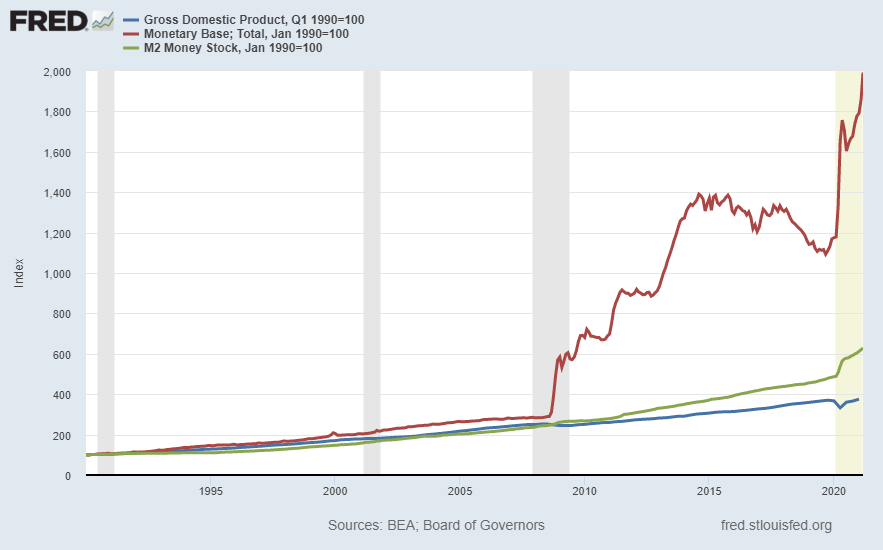 The following graph illustrates that the majority of the QE created reserves remain in reserves, not in M2 (green line). 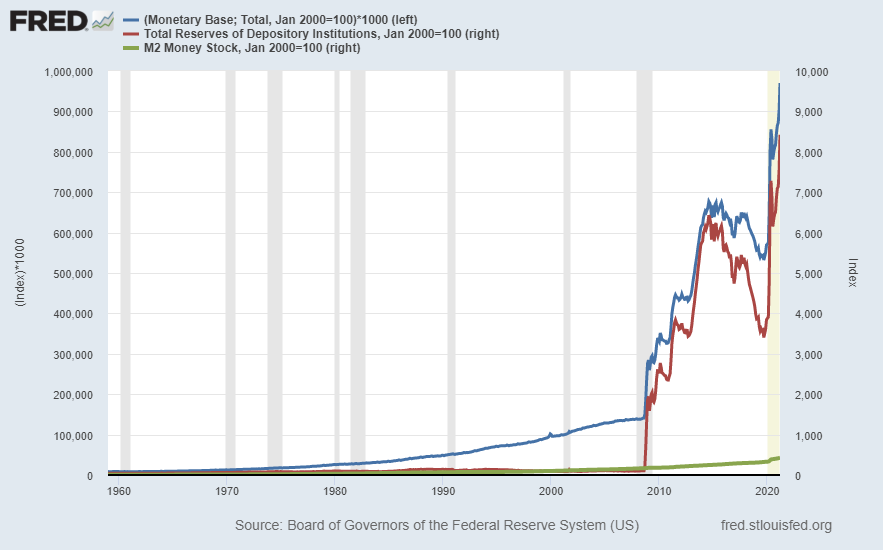 Analysts often show a graph in which it appears the stock market is correlated with the growth in the Fed’s balance sheet.  The question is, does this correlation prove causation?  In other words, is there a mechanism in place where the reserves credited by the Fed when purchasing bonds result directly in stock purchases?  While the Fed has assisted in fueling the stock market bubble by keeping interest rates near zero, they are not directly funneling cash into the market.  The extremely low interest rates have contributed to the attitude by investors that “there is no alternative” (tina).  As such, investors ignore their appropriate risk threshold and buy stocks, because in their minds, there is no other way to make money.  They are not concerned how overvalued stock prices are relative to fundamentals.  And on top of that, they are using debt to finance stock purchases.  Low rates have pushed margin loans to their highest level as a percentage of GDP in history.  See the chart of margin debt below from Advisor Perspectives.

And finally, low rates have encouraged corporations to borrow money in record amounts.  These funds are then used to repurchase their stock.  These stock buybacks have contributed to much of the increased equity demand over the past decade.

Much to everyone’s disbelief, the main contributor to the stock market bubble is not QE itself, but the thought of QE.  It is mostly a psychological phenomenon.  Economist John Hussman stated it like this,

“Quantitative Easing! is the product of pure mental perception, distinct from the need for any accurate link to reality. It isn’t constrained by historical evidence or any well-defined ‘limit. It exists flawlessly and exclusively in the minds of investors, it is reinforced by constant repetition, and it has only one message: ‘The Fed holds the market up. Ignore everything else.’ Period.

Quantitative Easing! is synonymous with The Fed! These phrases are complete and fully-articulated arguments. They don’t need data. They don’t need a ‘mechanism.’ They don’t need history. The mere words are enough. Their power to support the markets is so obvious to investors that simply referring to them is treated as a mic drop. They rest entirely and victoriously on investor psychology alone. It’s that form of QE that has helped to drive the S&P 500 to valuations that exceed the 1929 and 2000 extremes.”

The other concern regarding QE is the potential for inflation.  I will explore that topic in next week’s newsletter.  As for the Fed’s actions, yes, they are contributing to the stock market bubble.  However, there is no direct mechanism by which QE is funneled into the stock market, despite what most pundits state.