Can GameStop Investors Win the Battle and Lose the War?

Last week the news reported David took on Goliath on Wall Street via GameStop stock.  The company GameStop has seen earnings fall for several years.  Recently those earnings have turned into net losses.  Large hedge funds (Goliath) recognizing the downtrend in their earnings have been “shorting” the stock.  However, retail speculators (David) were determined short sellers were not going to take down GameStop stock, and they (encouraged through web forum WallStreetBets) bought the stock heavily through Robinhood and other similar platforms. The first graph below shows the price action which forced many short sellers to buy and cover losses (short squeeze).  This activity caused many brokers to limit or eliminate further purchases in GameStop and a few other stocks.  This led to speculation of potential collusion behind the scenes.  So, while many retail speculators appeared to be beating the hedge funds (Goliath), the prices at which the stock was purchased were at such obscene valuations it set the speculators up for failure. Even though they may have succeeded in winning a battle, when the ultimate market correction occurs, they will likely lose the war.

“When finger point at moon, don’t look at finger or you’ll miss the moon.”
–Bruce Lee

It is being reported that last week David took on Goliath on Wall Street.  As is usual, politicians, from both sides of the isle, quickly asserted their support for David.  All of the hoopla surrounded the stock of GameStop as well as a few other “heavily shorted” stocks.  In this missive, I will attempt to summarize the events which have transpired and shed light on the fact that even though everyone is rooting for David to win the battle, most are ignoring the real situation which will likely cause David to lose the war.

The trading platform Robinhood has become well known for inspiring the “average Joe” to open a brokerage account and trade in stocks.  The enticement being used to reel-in retail “investors” is a “no transaction cost” platform.  Retail investors can trade small amounts in securities with no commissions or transaction costs.  Combine this with the online retail trading forum Reddit’s WallStreetBets (WSB) and you have the recipe for tremendous speculative trading.

The company GameStop has seen earnings fall for several years.  Recently those earnings have turned into net losses.  Large hedge funds recognizing the downtrend in their earnings have been “shorting” their stock.  In simple terms, shorting involves borrowing shares from another investor and then selling the borrowed shares.  The hope is the market will realize the company’s share price is too high relative to earnings, and the price will fall.  If the price falls, the short seller can then buy the stock at a lower price and pay back the shares borrowed therefore profiting from the decline in the stock price.  Some see this as “betting against America” or trying to “destroy” a company.  In reality it is a technique used, usually by sophisticated investors, to gain from the reversion of the stock price to a reasonable price based upon fundamentals.

Recently, Chewy co-founder Ryan Cohen purchased close to a 13% stake in GameStop.  This move seemed to encourage the speculators communicating on WSB to purchase shares of GameStop.  Many of these trades were initiated through the broker Robinhood.  The hedge funds shorting the stock maintained, and possibly even increased, their short positions.  My understanding of the situation is the retail speculators decided to take on the hedge funds by invoking a “short squeeze.” This means the retail speculators purchased large amounts of GameStop in order to push the price upwards.  When the price soared, the hedge funds which were short the stock were forced to “cover their short” or go into the market and buy the stock at the current higher price in order to prevent any further losses.  The combination of the retailers pushing the stock price higher and the hedge funds purchasing to cover their shorts (short squeeze) pushed the stock price to the stratosphere.  See the price action below.  The stock was selling for around $11 per share just a couple months back reached $350 last month.  As shown below, the stock fell over 30% on Monday.

The extreme rise in the stock price was a calculated move by retail investors to take down the hedge funds (Goliath) shorting this stock.  This is where it gets interesting and a little technical.  Nothing in this world is “free.”  Robinhood and other trading platforms offering “free trading” do not charge account holders a fee to execute trades.  Robinhood is not allowing free trading out of the goodness of their heart.  The reason the trading is free is because the brokers are earning revenue by selling the order flow.  In other words, the trades are being sold to market makers for execution.  According to an article in The Washington Post, “Robinhood routes more than half of its customer orders to Citadel, by far its largest market-making partner by volume, Robinhood disclosures show. The app also works with Virtu, G1 Execution Services, Wolverine and Two Sigma.”  Citadel Securities founder Ken Griffin also founded Citadel LLC, a hedge fund.  Some investors might be concerned that the hedge fund could gain access to the order flow data in order to front-run the trades, which would push the stock price even higher and result in less beneficial execution for the Robinhood traders.

In addition to purchasing GameStop stock, these speculators purchased a large amount of “call” options.  These options give the purchaser the right to purchase the underlying stock at a predetermined price.  The hope is the price of the stock will rise and the option holder can execute the option to purchase the stock at the lower strike price.  Often market makers must purchase the stock to have available to meet potential option execution.  These purchases add more upward pricing pressure.  When the stock price skyrocketed last week, due to the culmination of the above-described actions, Robinhood followed by other brokers, began limiting or even eliminating the purchase of GameStop stock, as well as a handful of other stock involved in a short squeeze.  While some brokers prevented purchases, others changed margin (borrowing to purchase stock) requirements for selected stocks.  Citadel Securities, the market maker used for the majority of Robinhood trades, denies pressuring the brokerage firms to limit trading in these stocks.  Their response came as a result of speculation the purchases were limited to minimize further losses by Citadel LLC and other hedge funds hurt by the short squeezes.

An investigation into the events of last week will likely take place.  As reported in The Washington Post article mentioned previously, “The events triggered a swift response from a wide range of lawmakers, from Rep. Alexandria Ocasio-Cortez (D-N.Y.) to Sen. Ted Cruz (R-Tex.), who said they supported an investigation of Robinhood’s decision to block trading in GameStop. Rep. Maxine Waters (D-Calif.) announced that the House Financial Services Committee would hold a hearing to examine how the market ‘has been manipulated by hedge funds and their financial partners to benefit themselves while others pay the price.’”

The events which transpired last week should be further understood; however, this completely ignores a more serious issue.  Retail investors are being encouraged to speculate in stocks with valuations so obscene it is only a matter of time before those left holding the bag lose their shirt – if not their entire savings.  Forums such as WSB in conjunction with free trading platforms such as Robinhood have given individuals the ability to speculate wildly in stocks.  The fevered pitch of such speculation can be seen by the number of non-profitable stocks being traded by inexperienced individuals on the hunt for “easy money.”  This type of speculation is typically witnessed at the peak of bubbles.  Look at the chart of Goldman Sachs Non-Profitable Technology Stock Index below.  This is reminiscent of the peak of the Technology Bubble in 2000 which was followed by an 83% drop in the tech-heavy NASDAQ 100. 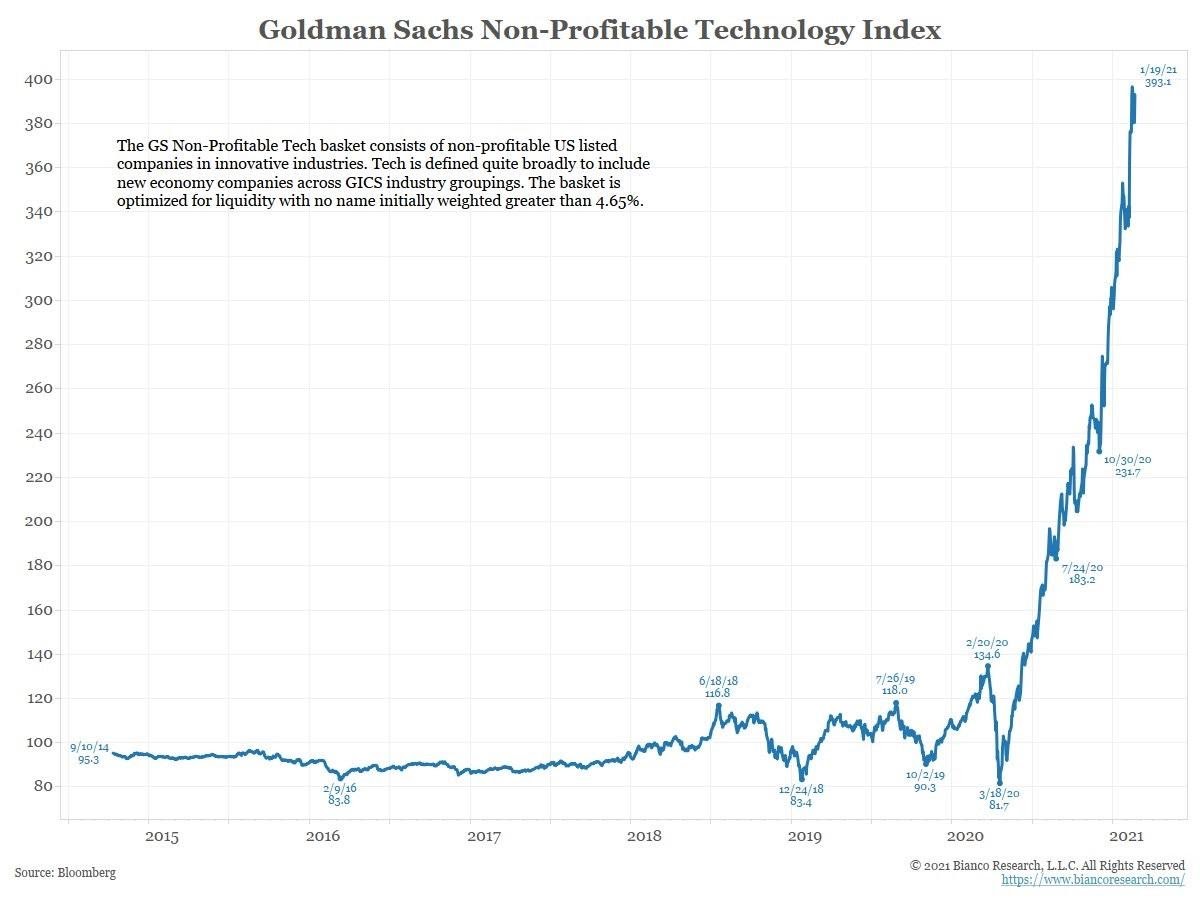 Much of the trading activity on platforms like Robinhood is being performed by those who can least afford to lose money.  Rumors abound about individuals using their stimulus checks to bet on GameStop stock.  Many of these speculators likely have no clue as to the risk being undertaken by purchasing stocks at such ridiculous valuations. The chart below from economist John Hussman illustrates the S&P 500 median price-to-revenue ratio.  It is now higher than ever before.  This means that speculators are paying more for less revenue than ever before in stock market history. 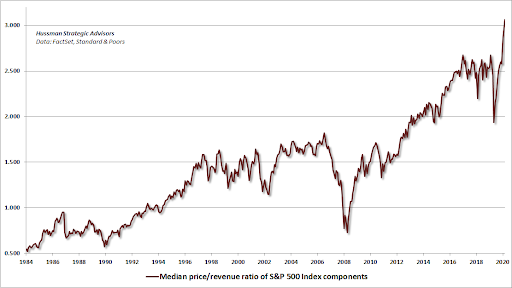 While the media and politicians express concern, and rightly so, that individual investors had access to certain stocks limited or prevented, the more serious concern is the level of speculation in non-profitable stocks by unsophisticated investors.  While investors should have the right to access markets just as freely as hedge funds, the frenzied speculation occurring will likely leave many licking their wounds once the market corrects.  Even before the market corrects, a day like Monday in GameStop could have forced a speculator to sell at a 30% loss depending upon his purchase price.

The search for easy money has reached a fevered pitch.  While David might have won the battle against Goliath in the sentiment surrounding GameStop, in the end David could end up losing the war by holding obscenely valued stocks when the market corrects.