Where Are We Now?

Last week 785,500 people filed for first-time unemployment benefits.  Since Covid-19, the number of weekly unemployment claims filed have exceeded the previous all-time record of 695,000, each and every week. (See first graph) Also, one can see the labor force participation rate never recovered much from the Great Recession (2007-2009) (second graph).  The employment-to-population ratio, which is not affected by those who have fallen out of the labor force, is a good indicator of the actual employment situation. (third graph) Additionally, I provide my thoughts on how various election results may impact the stock market moving forward.

“In the business world, the rear-view mirror is always clearer than the windshield.”
–Warren Buffett

Last week 785,500 people filed for first-time unemployment benefits.  COVID-19 began impacting employment in March of this year.  Since then, the number of weekly unemployment claims filed have exceeded the previous all-time record of 695,000, recorded in 1982, each and every week.  See the chart below from Advisor Perspectives.

In the graph below, also from Advisor Perspectives, you can see that the labor force participation rate never recovered much from the Great Recession (2007-2009).  Currently, even with the October bounce, it remains far below the early-2000 peak.

There was a large discrepancy between the BLS’ two surveys used to gather unemployment data.  The Establishment Survey is used to announce the number of new jobs created for the month.  The Household Survey, on the other hand, is used to calculate the unemployment rate.  Although the Establishment Survey showed 638,000 new jobs, the Household Survey looked much brighter with over 2.2 million new jobs created, thus the large drop in the unemployment rate.  It is likely over the next few months the two surveys will adjust for such a large discrepancy. 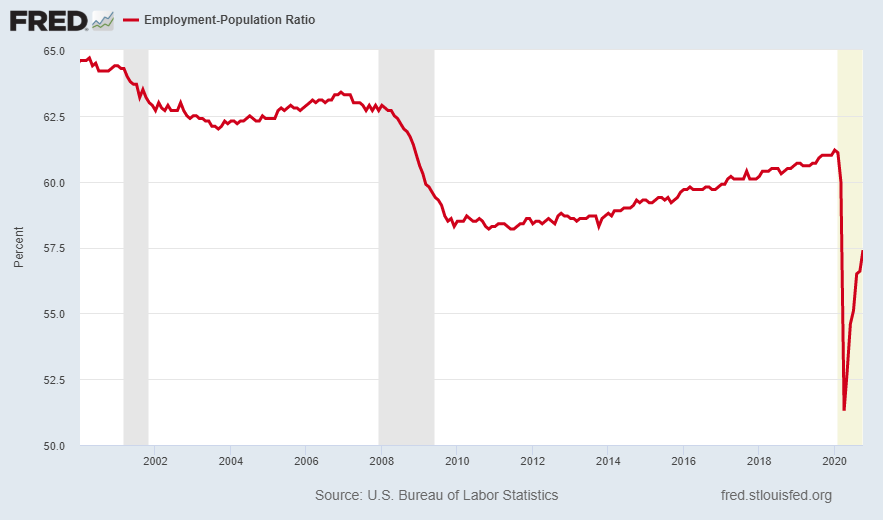 In other news, the election is finally over!  Or is it?  It appears it could take quite a while before legal challenges and state recounts are completed.  It doesn’t look like anyone will be conceding anytime soon.  Although the market surged last week, I am not sure how much was due to the projected election results.  If the numbers end up where the Democrats take the Presidency and the Republicans take the Senate, that, in my opinion, would be a worst-case scenario for the market.  The reason I state that is a President Biden would likely utilize executive orders to implement as much of his environment plan as possible.  This could result in increased prices for fossil fuel related goods and services.

Then, a Republican Senate might determine a large stimulus plan is not warranted, especially with today’s announcement of a potential COVID-19 vaccine from Pfizer.  Almost all increases in the stock markets this year have been attributable to either prior stimulus or hopes for a new large stimulus package.  A situation where costs increase putting pressure on spending and profit margins at a time when many Americans are still hurting due to the pandemic, is not one where I would foresee the market expecting a surge in corporate earnings.  Add to that the plan by the Democrats to raise taxes on the wealthy and on corporations, and lower spending and profits are likely.

Only time will tell who ends up as our next President and which party controls the Senate.  The stock market reacted strongly Monday, as could be expected on the day of a potential vaccine announcement.  Yet, the market sold-off much of the prior night futures and early-day gains by the close.  Also, the VIX, described in last week’s missive, actually rose on the day.

All of this means that volatility and risk have not disappeared, but instead have increased.  Today’s market movements put the stock market at an even higher valuation, breaking previous records.  Caution and vigilance are warranted.  If the news about the Pfizer vaccine pans-out, then this could push the market higher in the short run.  However, if the probability for a large stimulus package diminishes, then large downward movements are possible.  And that’s where we are now!