What is The Big Government Debt Hoax?

I have often written about how debt and demographics are impediments to future growth. In this week’s missive, I explain how the Federal government is playing a game with its debt picture. Through some accounting gimmickry, intragovernmental debt is typically excluded from analyses of Federal debt. About 27% of total Federal debt is thus ignored. And to make matters worse, the interest related to intragovernmental debt is paid by the Treasury by issuing additional debt. As such, this amount is excluded from budgetary discussions of interest on Federal debt. With a mere one percent rise in interest rates, total interest would approach 40% of total income tax revenue. I have included an analogy in The Details which helps explain the ludicrous logic behind this accounting. Please review the graphs and explanations below for a clearer picture.

“Credit supposes specific and permanent funds for the punctual payment of interest, with a moral certainty of a final redemption of the principal.”

What exactly is “intragovernmental debt”? The majority of this category represents the surplus of payroll tax revenue received over the years, above the amount required for Social Security or Medicare benefit payments. This surplus resides in one of numerous trust funds. Here’s where it gets interesting. By law, the excess trust funds must be invested in interest-bearing obligations of the United States. A special category of Treasury securities is used for this purpose. The trust now holds these Treasury securities while the funds used to purchase them are transferred to the Treasury. The Treasury then has free-rein to spend this money for governmental operations. The interest earned on the trust-owned Treasury securities is paid by the Treasury by issuing additional Treasury securities for the interest due. Since the interest is paid in additional securities, the budgeted interest expense excludes this amount and appears much lower than it should. The chart below from Statista illustrates the difference in the budgeted interest on debt held by the public and intragovernmental debt interest. 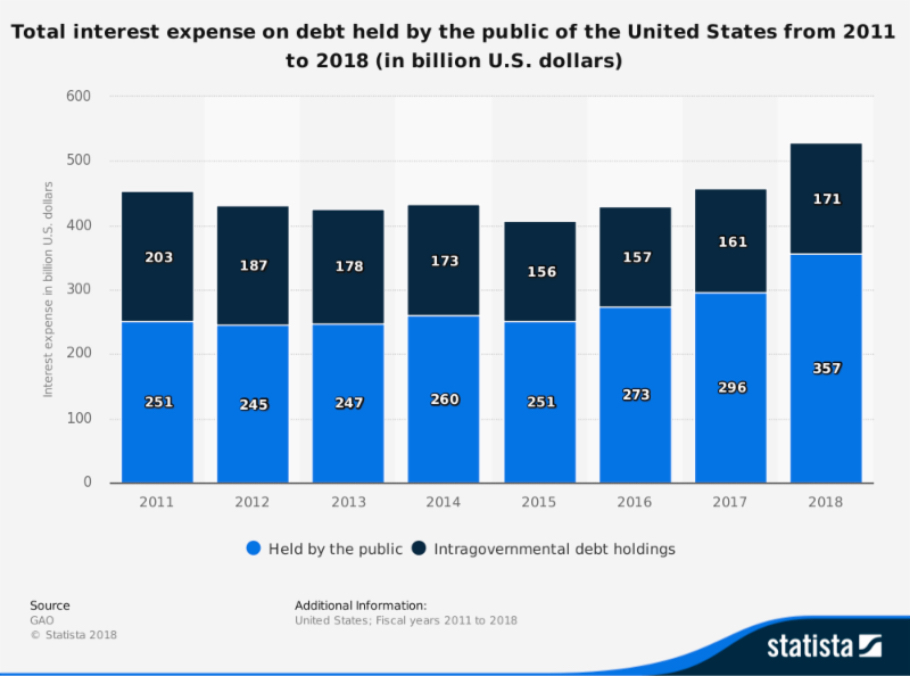 As can be seen, a full 32% of interest is ignored by most analysts examining government debt. Why is that important? The U.S. is very close to the point where total annual payroll tax revenue will drop below total annual Social Security and Medicare benefit payments. When that happens, there is no-longer a surplus of “cash” to transfer to the Treasury for government operations. The Federal government then will have a larger annual cash deficit. Federal operations, excluding Social Security and Medicare, are funded predominantly from income tax revenue. As of fiscal year-end 2018, total income tax revenue was approximately $1.9 trillion. Most analysts and politicians turn to the $357 billion in interest on debt held by the public and believe interest costs represent about 19% of income tax revenue. In reality, it is closer to 28% factoring-in total interest owed.

And that interest amount results from the current artificially low interest rates. (See my January 15 newsletter for an analysis of interest rates.) According to TreasuryDirect.com, the average interest rate on debt outstanding as of January 2019 was 2.479%. A one percent increase in average rates adds about $220 billion in additional interest expense, bringing the total to just under $750 billion annually. This would represent almost 40% of income tax revenue and would exceed the total Defense budget.

Let’s use a little analogy to attempt to better grasp the concept. Suppose an individual, let’s call him Sam, earned $20,000 per year more than he needed to spend. Sam’s intention is to save this annual surplus until the funds are needed in retirement. Now, instead of purchasing stocks, bonds or mutual funds as done by most savers, Sam decides to write a “note” or IOU back to himself. He then lends the money to himself at current interest rates (we will assume 4% for this analysis). The interest is paid to himself by adding more to the total of the note due. With note in hand, he proceeds to spend the “saved” money.

Sam often bragged about how much money he was saving for retirement as he watched his “note receivable” grow. After doing this for 20 years, Sam is ready to retire. He looks at his savings statement and is happy he has saved just over $595,500 including interest. When he was ready to spend some of his savings in retirement, he realized he had no cash. In order to generate cash, he would have to borrow money from the bank to pay himself the amounts due under the note.

I hope the absurdity of this situation is sinking-in. Sam assumed he could focus only on the amount due on the note and ignore the liability to himself. In reality, he had nothing saved and the amount needed for his retirement was going to have to come from new debt.

This is not unlike what is occurring in the Federal government as the intragovernmental debt and interest thereon are effectively ignored but will appear with a vengeance in the future. In my opinion, intragovernmental debt should be accounted for in a similar fashion as debt held by the public. To ignore it is to create an enormous hoax.

At Cremerius Wealth Management, portfolios are developed to take into account the state of the economy, market cycle and valuation, and relative strength. Our goal is long-term growth with limited downside potential. If you need assistance with your portfolio, please give me a call. I would be happy to review your situation and explain how we can help you work towards achieving your goals.