How Long Can the Charade Last?

The primary driver of stock price increases over the last ten years has been corporate stock buybacks. (See graphs below) The Federal Reserve monetary policy made short term interest rates low, and thus the availability of funds for stock purchases. This also helped drive earnings per share prices higher. Additionally, headlines and “hope” have helped drive prices higher. Hope for a Brexit deal and hope for a tariff deal are two examples. However, corporate earnings do not justify the stock prices (see FED graph). And now CEO confidence is plummeting which has often been a leading indicator of recessions. The graphs and explanation in The Details depict the charade in financial markets. The question remains how for how long?

“You never know who’s swimming naked until the tide goes out.”
— Warren Buffett

The impetus for the move higher in the stock market over the past eight years has little to do with organic growth in corporate operations and revenues and more to do with providing the impression of growth combined with a large dose of “hope.” In this missive, I will attempt to break down the principal factors and compare with underlying fundamentals. Some of this information has been presented before, while other data is making its debut appearance.

The first and largest contributor to the market ascent, despite fundamentals, is stock buybacks. This undertaking is used to provide the appearance of growth on a per-share basis. Its impact cannot be ignored. Below are two charts illustrating the magnitude of buybacks in driving the stock market higher. However, a recent warning was espoused in a note from Goldman Sachs that buybacks are on the precipice of plummeting among concerns about the slowing global economy. This would take away the number one impetus for the rise in stock prices. 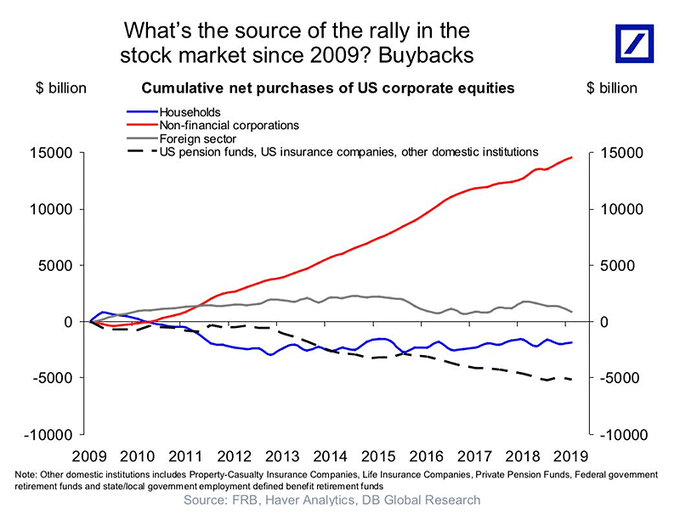 Of course, much of this activity was funded with low-interest corporate debt. As such, companies have weakened their balance sheets, purchasing their own stock at massively overvalued prices. Corporate debt is now at record high levels. And while low interest rates seem to justify more debt, at some point repayment of principal becomes the larger concern.

The low interest rate environment was provided by the Federal Reserve Bank’s (Fed) experimental monetary policy. With short-term rates held to near zero percent and a vast surge in liquidity provided by the Fed’s balance sheet expansion. These were originally thought to be temporary actions to be reversed once the “recovery” took hold. A decade after the Great Recession and even the smallest attempt at normalization and the market plunged. Getting nervous, the Fed has now begun to grow the balance sheet again. 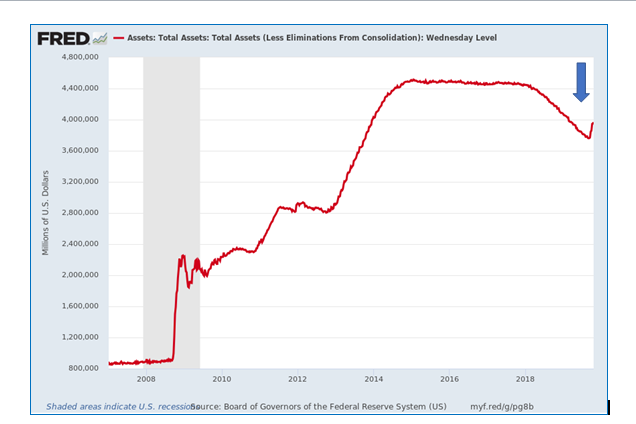 Presently, the market is moving on short-term “hopes.” For example, this morning (Monday) I noticed on financial media, the explanation for the rise in the market was “hope for a Brexit deal” and a statement from Larry Kudlow, Director of U.S. National Economic Council, on “hopes” for getting “December tariffs on China off.” Both produced visible short-term responses in stock prices. The hilarity of it is, it is just more hype. For instance, when the referendum was voted on in June 2016 for the U.K. to leave the European Union, all the talk was how this would tank the stock market. Now, a Brexit deal boosted the market. And, the deal is nowhere near complete.

And the subject of tariffs on China is impossible to follow. Literally, in minutes news reports can change from “China is the enemy” to “We respect China and a deal is imminent.” Investing on hopes, especially ones that would only provide a sugar-boost to the economy is dangerous. The current estimate for third quarter GDP growth by the Atlanta Fed is 1.8%, in line with the limited growth seen over the past decade.

Investors seem to be moved by the hype on financial media versus the underlying data. The valuation of S&P 500, using the Shiller P/E, calculated using the price of the market divided by 10-year inflation adjusted earnings, has grown from 21 in 2012 to 30 today. It reached a high of 33 prior to the market plunge in the fourth quarter of 2018. The long-term median valuation level is 15.8. Therefore, the continuous increase illustrates that investors are paying more dollars for less earnings.

Historically, over the long-run corporate earnings growth should resemble nominal (before-inflation) GDP growth. The chart below shows a comparison of the change in nominal GDP growth, corporate earnings growth, and the price of the S&P 500. Notice that corporate profit growth (red line) has lagged nominal GDP growth (blue line), and both are completely disjointed from the price of the S&P 500 (green line). And, in order to get this limited growth, it took the Fed printing over $3.7 trillion and reducing interest rates to near zero percent. For this trend to continue, the Fed would have to embark on an even greater liquidity program and hope debt can soar at similar levels as in the recent past. 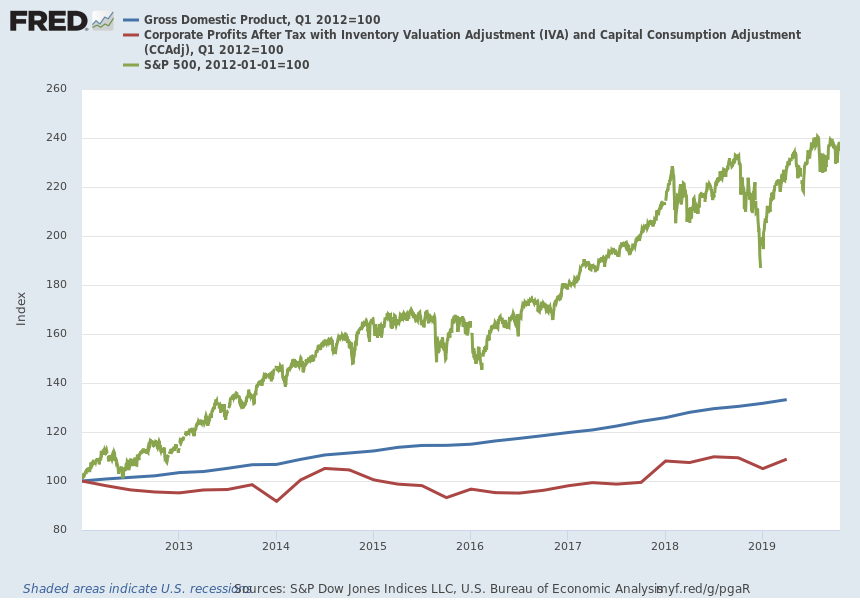 Furthermore, a recession would compound the issue. Below are a few charts showing what has historically been recessionary data. This is data investors are ignoring as momentum rules the day. 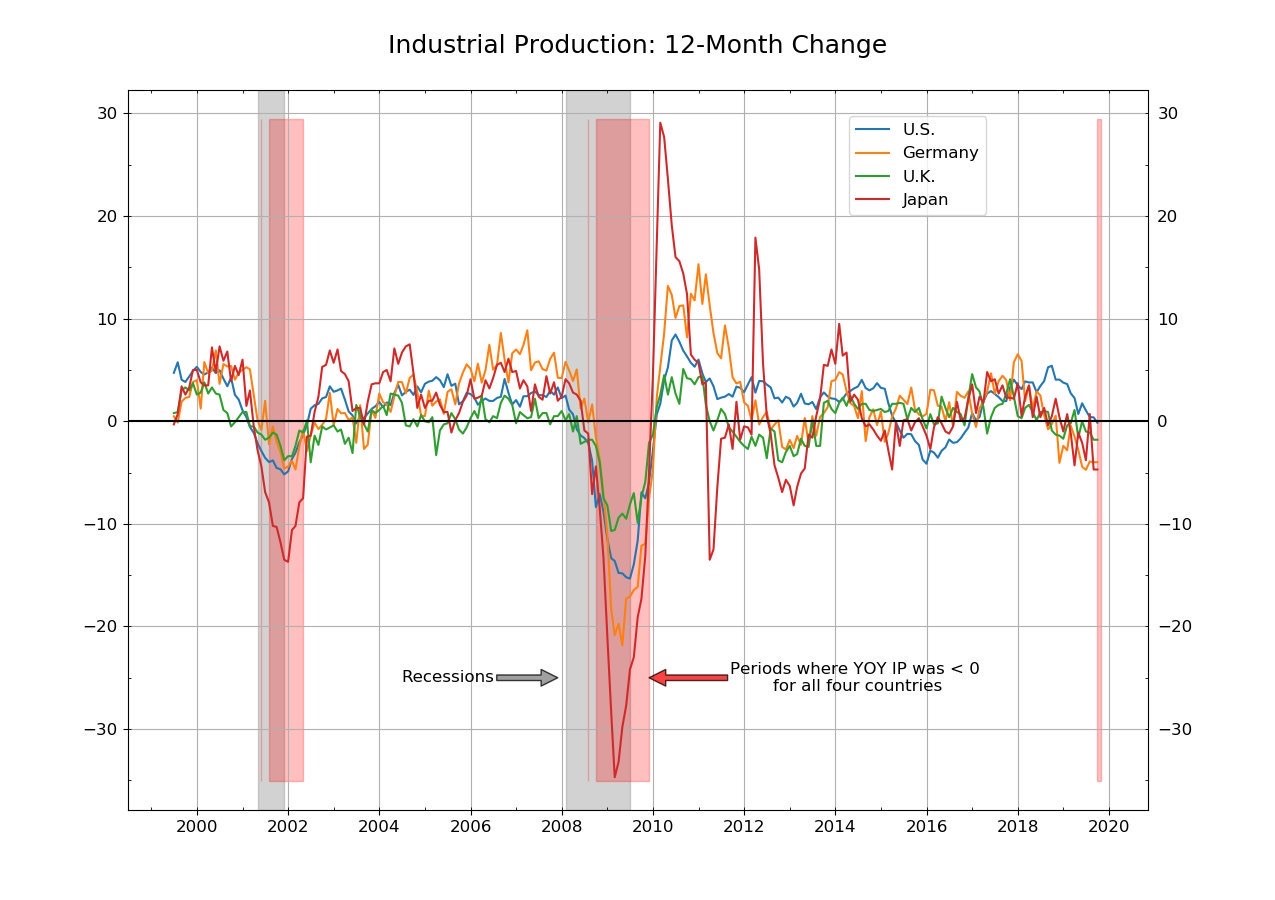 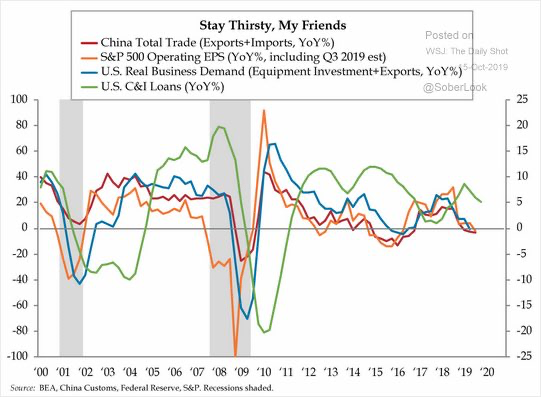 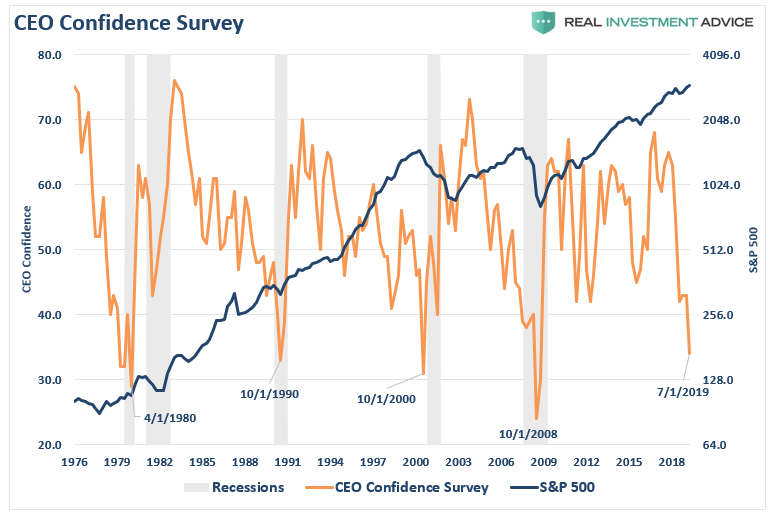 As investors continue to ignore the underlying fundamentals of corporate America, momentum investing rules the day. Momentum investing means that stock prices of “growth companies” will continue to go up because they have been going up. As compared to value investing where the stock of companies considered undervalued are purchased assuming earnings growth will push prices and valuations higher. Over the past 12-years, Rick Friedman of GMO pointed out that value stocks have underperformed growth stocks. Rasmussen highlights, via David Robertson on Real Investment Advice:

While investing based upon central bank activity, expanding corporate debt and stock buybacks, soaring momentum stock prices, and a lot of “hope” has worked-out for a while, the old adage “easy-come, easy-go” has always come true. It might make some investors “feel” better knowing their stock prices are higher – even if not justified by underlying fundamentals – however, history has proven that all gains achieved after overvaluation levels are hit will eventually be eliminated. It has happened every time.

Some believe today, as many have in the past, that actions by central bankers and politicians can produce a never-ending ascent in stock prices. A glance at prices versus earnings growth shows the market far surpassed logic years ago. And, as I reported last week, financial media will play the “beat” game to attempt to keep the momentum going. I read in an article on CNBC this morning that 81% of companies reporting third quarter earnings results have “beat” expectations. Sounds great, right? However, according to Hedgeye Risk Management, LLC, with only 74 of the S&P 500 companies reporting so far, year-over-year earnings have fallen 3.08%. The hype will last until it doesn’t, and no one knows when that will be, although we know it is long past due. The most recent large market correction occurred in the fourth quarter of 2018. Prices bounced back rather quickly with the support of a return to loose monetary policy. What if next time central banks can’t overrule fundamentals? It might be helpful to review Japan’s Nikkei 225 index post-1989. How long can the charade last?