Does the Data Support the Cheers?

The stock market is setting a record today on more “hopes and dreams” and supported by cheers from financial media and politicians. Unfortunately, the economic data is diametrically opposed to the stock market moves. Below I summarize a smattering of economic data from a number of different sources in order to shed light on this absurdity. Someday reality will appear with a vengeance, despite the cheerleaders.

“Beware lest you lose the substance by grasping at the shadow.”
— Aesop

This morning, Monday, the stock market opened in “record” territory. The President even entered the role of stock analyst predicting a “good day” for the stock market. All of this would lead many investors to assume a resurgence in strong corporate profit and economic growth is on the cusp. Unfortunately, none of that is true. Financial media’s justification for the “record-setting” morning market move was once again, “hope” for a China trade deal and general FOMO (fear of missing out) on more upward movement in the most overvalued market in history. I thought this might be a good day to highlight some of the economic and earnings data released recently.

“We[‘ve] been seeing some rumblings in the riskiest credits – the CCCs. We’ve seen some leveraged loans go bad. These are not the types of announcements you would anticipate seeing in a non-recessionary climate.” via BNN

“China’s Industrial Profit Widens Drop on Economy, Deflation. ‘The larger slide in September (-5.3%) was due to a faster decline in industrial product prices and a slower growth in sales.’ Diminishing returns of stimulus measures.”

“Survey: US business hiring falls to a 7-year low ‘Just one-fifth of economists surveyed by NABE said their companies have hired workers in the past 3 months, down from 1/3 in July. Job totals were unchanged at 69% of companies, up from 57% in July.’” 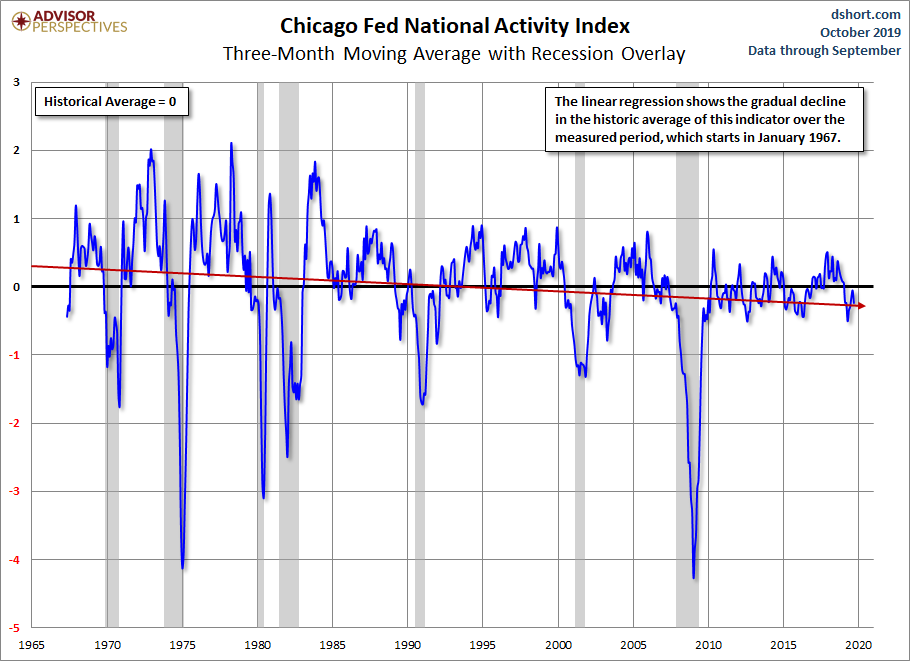 As stated on the Advisor Perspectives website, “The Chicago Fed’s National Activity Index (CFNAI) is a monthly indicator designed to gauge overall economic activity and related inflationary pressure. It is a composite of 85 monthly indicators as explained… on the Chicago Fed’s website. The index is constructed so a zero value for the index indicates that the national economy is expanding at its historical trend rate of growth. Negative values indicate below-average growth, and positive values indicate above-average growth.”

Economist David Rosenberg of Gluskin Sheff, “US trade data just came out and showed the damage already wrought…exports are down 3% YoY while imports have shrunk 4.6%.” 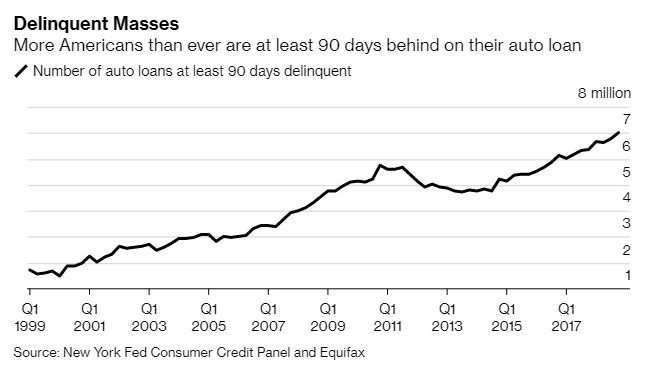 Goldman Sachs, “today’s inventory data was weaker than our previous assumptions. We lowered our Q3 GDP tracking estimate by two tenths to +1.4%.”

With only 200 of the S&P 500 companies reporting, Hedgeye Risk Management, LLC reports that year-over-year Q3 earnings have fallen by 0.51%. This number is mainly supported by interest sensitive companies in the Utility and Communication Services sectors, with Materials leading the plunge so far down 22% YoY.

And from the Global Macro Monitor, “Stock valuations are at record highs and the markets are so, so gummed up and distorted by government intervention, mainly from the Fed — the ultimate socialism, in our book — that policymakers and market analysts have lost their compass and can’t tell true north from south, east from west or front from back. The cheerleaders were out in full force with their pom-poms this week, by the way.”

Economist Michael Pento in an interview with Greg Hunter on USAWatchdog.com,

Pento explains, “So, the Fed changed their mind, panicked, the Fed panicked…”

“They not only stopped raising rates, they now cut rates twice, and they are going to cut rates again at the end of this month. They are also fully back in a massive QE. They have a $130 billion revolving repo facility shoving $130 billion every night, rolling it over, trying to re-liquefy the banking system and back into QE–$60 billion per month. At the peak, it was $85 billion. So, they are almost back to the peak of QE (during the Great Recession). They did not scale in, the Fed went to $60 billion right away.”

Why the sudden burst of money printing when we are being told the economy is fine?
Pento says the Fed is panicking to stop a “depression.” That’s right, a depression.

Given all these imbalances and deformations, the Fed knows we are not going to have some mild recession. If they don’t re-liquefy the money markets, the same thing that happened back in 2008 would happen today, only the stock market was only at 100% of GDP and today it is 150% or one and a half times the economy. So, the plunge in the stock market would be huge and from a much higher level. Back in the Great Recession, unemployment claims spiked. We had millions of people laid off, and the same thing would happen today only it would be much worse.”

The hopes and dreams propping up stock prices to record levels while real economic data plunges to recessionary levels should reveal the temporary nature of the grand illusion presented by the financial media, politicians and other cheerleaders. The conditions are not unlike other bubbles at peak absurdity. Reality will eventually appear with a vengeance, despite the cheerleaders.