Policymakers in the government and the Federal Reserve put an emphasis on the message to the public that they have everything under control – even before the pandemic. By lowering interest rates and providing unprecedented government stimulus, they are flying blind in hopes of supporting the messaging. However, over the last 13 years the Federal debt has grown over three times to $28 trillion or 131% of GDP. Additionally, for fiscal year 2021 the annual deficit is projected to be $1 trillion – not including the $1.9 trillion proposed stimulus package or any further stimulus passed. As in 2020, the annual deficit could approach – or even exceed – annual Federal revenues. Studies have shown when the ratio of total Federal debt to GDP exceeds 90% for five consecutive years, GDP growth is reduced by about one-third of long-term trend growth. At some point it is not merely payment of interest that is of concern, but repayment of principal. The ending to policymakers’ grand experiment is unknown. But precedent in other countries does not inspire much hope. Please proceed to The Details for the full explanation.

“Without facts and principles, data is useless.”
–Bob Hoffman

Presently, citizens of the U.S. are participating in the greatest financial experiment in history. And no one asked if they wanted to participate. In order to justify the actions taken by Federal authorities over the past decade and continuing at a fevered pace today, the Federal Reserve Bank (Fed) has been on a messaging mission. The focus of the messaging is to convince a mostly unknowing public that the size of Federal debt and deficits does not matter. The point is to fool the citizenry into believing they have everything under control. If not, citizens would begin to panic, resulting in more savings and less debt-financed spending. This behavior would hurt the already dismal pace of economic growth. The massive drag of debt has painted the Fed into a corner where there is no escape. Hence the need for messaging.

The myth, I mean message, is the Federal Government can run enormous deficits until the economy “recovers” at which time deficits will begin to fall. And, as long as the Fed can purchase the Treasuries used to fund the deficits, by electronically crediting the banks’ reserve accounts for which there is no limit, then everything will be okay and will return to normal. Please see last week’s missive for a discussion about the economy returning to normal.

The thing about financial data is it is easy to fool the citizenry. The financial system is so complex, the data can be manipulated in a way to provide the illusion that everything is going to be okay. Mark Twain once said, “Facts are stubborn things, but statistics are pliable.” For instance, the chart below is used to convince the public that lower interest rates allow for much more debt. Using broad strokes, this argument will be interpreted by most observers as justification for higher debt levels today, versus the lower debt levels at higher interest rates back in the 1980s and 1990s. 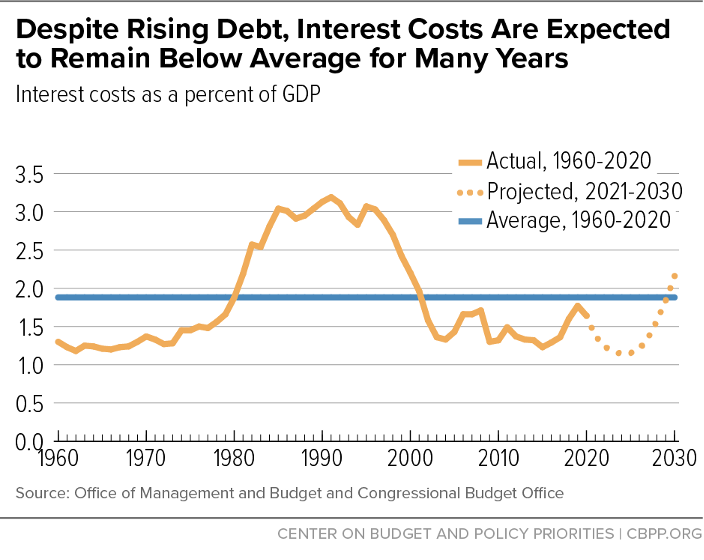 And while there may be some merit to that presentation, it ignores important facts, such as:  what happens when the debt is so large that repayment of the principal becomes as concerning as payment of interest?  Or, what if interest rates were to suddenly rise?  What if buyers lose confidence in the financial condition leaving only the Fed to purchase Treasuries?  What if the amount of Treasuries needed to fund such massive deficits leads to soaring inflation?  And how does the amount of Federal revenue compare to deficits?

The total Federal debt has almost reached $28 trillion.  This represents 131% of GDP.  (See chart below.) Total debt was approximately $9 trillion at the start of the Great Recession in 2007.  In thirteen years the debt has tripled.  The annual growth of debt versus GDP is disturbing. 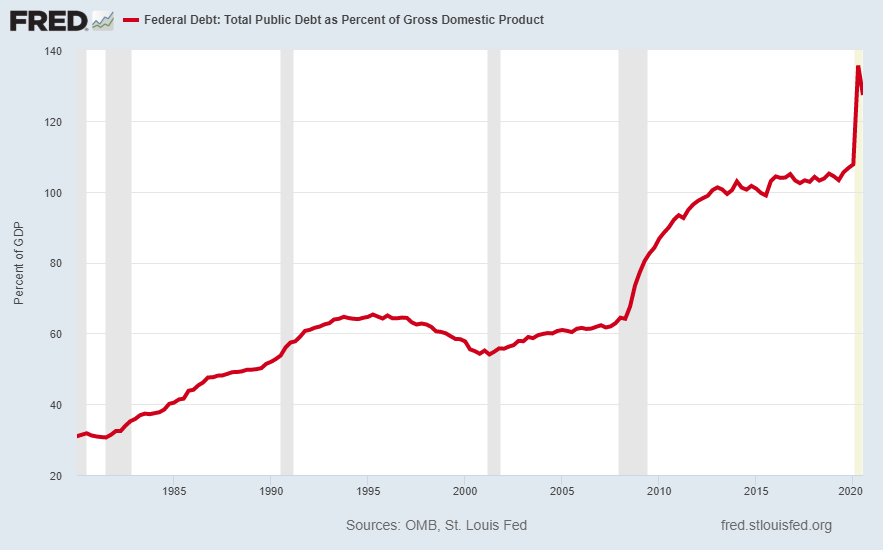 And below is a chart which illustrates growth of the annual Federal deficit in dollars and as a percentage of GDP. 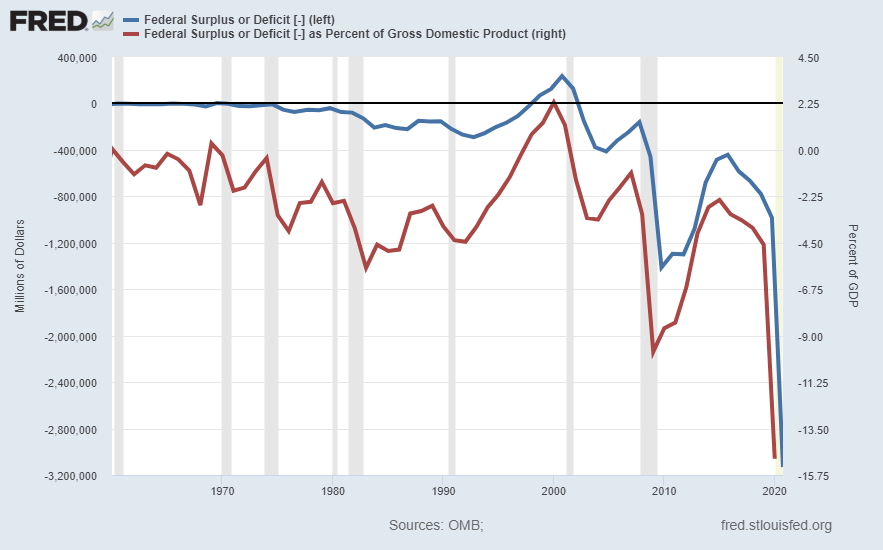 The extreme nature of the financial condition can be seen looking at the results for fiscal year ending September 30, 2020. The annual deficit was about $3.2 trillion. Total annual Federal revenues for the same period were $3.4 trillion. The deficit was 94% of total revenues for 2020. While it is true this was accelerated by the pandemic, the numbers for 2021 are already looking bleak. The original projection for the 2021 deficit was just under $1 trillion. However, the Biden administration is determined to pass a $1.9 trillion stimulus package and has indicated that even more will likely be necessary. Therefore, the deficit before additional stimulus above the $1.9 trillion, will probably be around $2.9 trillion for fiscal 2021. If an additional round of stimulus comes to pass, the deficit could exceed total revenue collected. This has not occurred in the post-WWII era.

Of the $3.4 trillion in total Federal revenue mentioned above, approximately $1.8 trillion comes from income taxes. According to Treasury Direct, total interest expense on debt outstanding for 2020 was about $523 billion. This represents 29% of the $1.8 trillion in total income tax revenues collected. This is a significant percentage of total income tax revenue. And, as mentioned previously, the enormous debt balance means that not only are interest payments due but also a growing level of principal payments.

Annual deficits of over 90% of total revenue collected, and total debt at 131% of GDP will present a significant drag on economic growth. Studies have shown that Federal debt to GDP over 90% for five consecutive years reduces GDP growth by about one-third of long-term trend growth. This results in a hole which becomes impossible to dig out of, especially when perpetual stimulus is necessary just to keep the economy from slipping further into recession.

The chart below from the CBO (Congressional Budget Office) shows skyrocketing debt as a percentage of GDP. As bad as this chart looks, it is actually worse than shown. The CBO is using “debt held by the public” instead of total public debt outstanding. This number excludes intra-governmental debt which is why total debt to GDP for 2020 in the graph appears to be closer to 100% (still bad) instead of 131%. I have written in detail before about the fallacy of ignoring “intra-governmental” debt. The gist of that newsletter was that due to perpetual deficits, additional “debt held by the public” will eventually be required to pay the intra-governmental debt, therefore it should be considered today.

Although interest rates are extremely low, the growing balance of outstanding Treasuries adds another element excluded from some analyses. Interest expense as a percentage of income taxes is increasing. Debt is being issued to fund deficits of such magnitude they almost equal total Federal revenue collected. There is a spiraling-effect where more debt reduces GDP growth, thereby requiring more debt to fund massive Federal deficits.

If perpetual stimulus leads to deficits greater than total revenues, the U.S. will soon discover the results of the existing grand experiment. Policymakers seem to be stepping into unknown territory all on “hope” that the situation will improve. There are no prior periods where similar events existed resulting in policy reactions seen today. The Fed and Federal government are flying blind. Precedent in other countries does not inspire much hope. Unfortunately, the complicated nature of the financial system allows for the leaders to obfuscate and mislead the public on what the realistic possibilities are regarding current policy directives. Time will reveal the truth.