Have We Entered Uncharted Waters?

Over the course of history, corporate fundamental performance and the resulting market cycle have mattered to investors. However, in the last ten years investors appear to have relied more on central bank policies and “hope” for their investment strategies. Central banks across the world have held interest rates low (even negative in many places), printed money, purchased bonds, and even purchased equity exchange traded funds. These extreme actions have not produced the “hoped-for” economic growth, but instead have created massive asset bubbles. Experimental central bank policies have pushed world economies into uncharted waters. The current stock price detachment from fundamentals has created one of the largest gaps in market history. Although short-term sound bites have fed the strategy of “hope”, in the long run market cycles matter. Please proceed to The Details for the complete picture.

“No wise man tries every day what he has proved wrong the day before.”
— James Truslow Adams

At this time last year, the S&P 500 was about to embark on a sharp descent, plunging almost 20% over the following three months. After repeated jawboning by Fed members in attempts at generating “hope” that talk of a more dovish monetary policy would “save” the market, a rebound ensued. With 2019 came a renewed sense of what volatility in the market means. Financial pundits have proceeded extoling the “year-to-date” performance in the market, failing to mention the S&P 500 Index is up a mere 2.5% over the trailing one-year period. And, the Russell 2000 is down 9.3% year-over-year. Or, that the domestic and global economic data has taken a dramatic turn for the worse. Or, that the upcoming corporate earnings season (Q3) could see earnings fall close to 3-4% or more.

As discussed in last week’s missive, those unaware of market cycles tend to focus on a combination of short-term market movements and “hope.” A typical day listening to financial media sounds like this, via BobMankoff.com via Mastering the Market Cycle by Howard Marks:

“On Wall Street today, news of lower interest rates sent the stock market up, but then the expectation that these rates would be inflationary sent the market down, until the realization that lower rates might stimulate the sluggish economy pushed the market up, before it ultimately went down on fears that an overheated economy would lead to a reimposition of higher interest rates.”

And then there is “hope.” Hope for more central bank action…because $17 trillion in negative yielding debt isn’t enough. Or, as reported on Zero Hedge, the Bank of Japan

“…owned a stunning 75% of all Japanese ETFs as the central bank keeps buying stocks under its ultraloose monetary policy. Perhaps more importantly, as of March 2018, the Japanese central bank has also become a major shareholder in nearly 40% of listed companies. According to Nikkei calculations at the time, the bank was one of the top 10 shareholders in 1,446 listed companies out of 3,735.”

Or that central banks in Europe, including the European Central Bank, will increase their purchases of sovereign bonds because, as seen in the chart below, they apparently haven’t done enough. 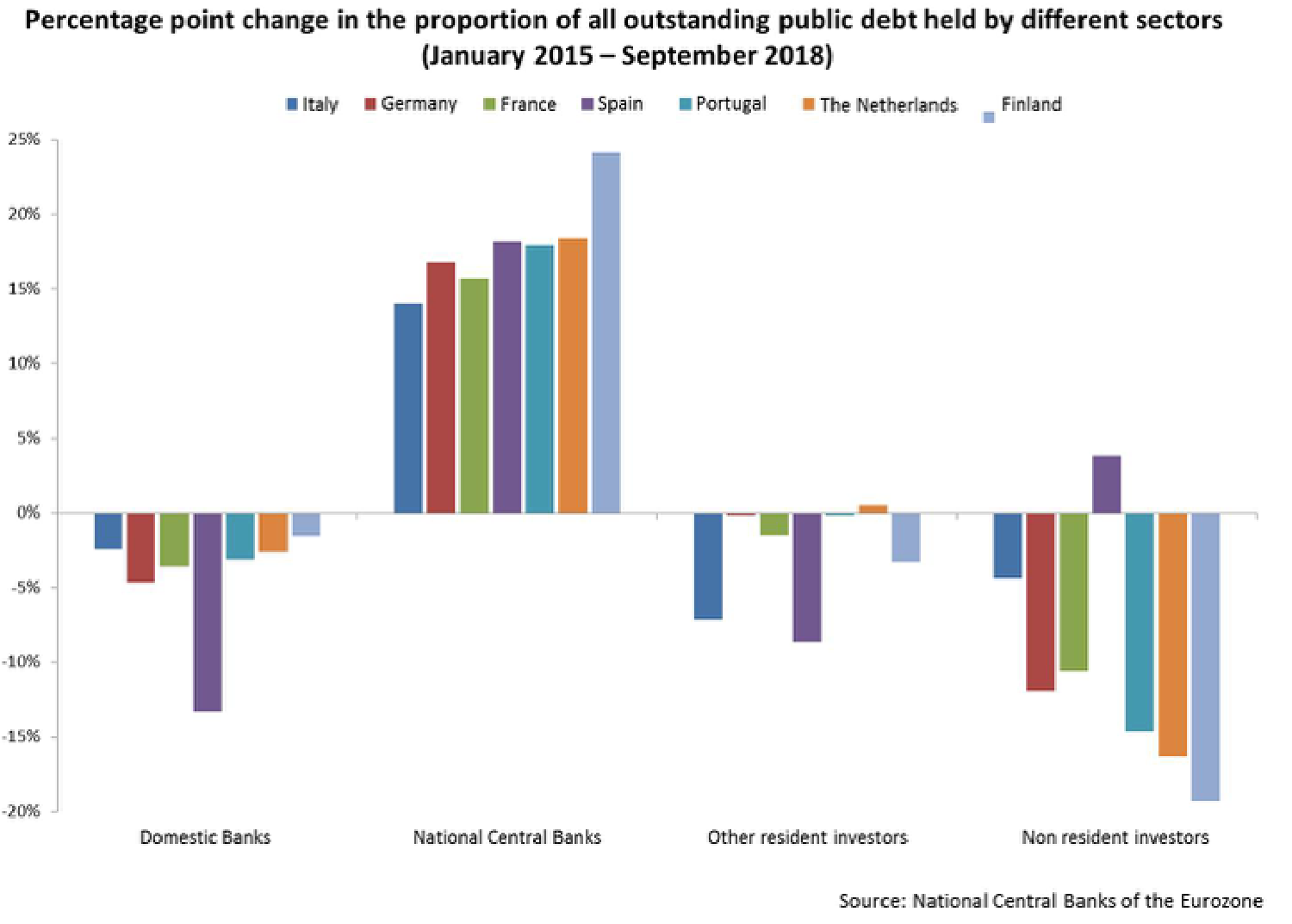 The calls for central banks to continue lowering rates and printing more money persist after a decade of experimental policy, and to what avail?  The economic data continues to worsen.  Has the thought that these policies aren’t the correct solution ever come up?  Just this morning (Monday) it was reported that South Korean exports plummeted 21%, the biggest drop in a decade.  And the German composite PMI (Purchasing Managers Index) dropped to a recessionary 49.1.  And, in the U.S., as reported on CNBC.com,

“‘Although picking up slightly, the overall rate of growth in September remained among the weakest since 2016,’ Chris Williamson, chief business economist at Markit, said in a statement.  ‘Prospects also look gloomy, with inflows of new business down to the lowest since 2009 and firms’ expectations of growth over the coming year stuck at one of the most subdued levels since 2012.’”

And there is always the hope for a new tweet suggesting trade negotiations with China seem “optimistic.”  As this “hope” is used by many investors as a reason for buying more stocks, it might be time to review the market cycle and current economic and corporate profit data.

Investors’ witnessed a dramatic sell-off this time last year.  The economic data is worse today than it was then.  The outlook for corporate earnings has deteriorated and it appears an earnings recession is likely.  Is it possible we see a repeat of last year’s end-of-year market action?  Or, can central banks and China tweets provide a “save”?  More importantly, is “hope” a good investment strategy?  The fundamentals have continued to detach from stock prices leaving one of the widest gaps in the history of the market.  Central banks are consuming the sovereign debt market, and in some places corporate debt and equity exchange traded funds.  The global economy is in uncharted waters.  Is this a time for an investment strategy based upon “hope”?