Has the “Stock Market” Become A Political Tool?

Historically, corporate earnings growth tends to track overall economic growth. However, for the past decade  economic growth has stayed around 2% while the stock market has soared. This disconnect creates stock market bubbles, which means greater risk of loss for investors. And now, the stock market is being used as a barometer for the economy and a tool for political purposes, thus confusing the investor. Political parties are using moves in the stock market to promote their respective political agendas. In The Details, data from another economist and an apolitical explanation of the political posturing is provided to help provide clarity during these confusing times. This analysis highlights the fact that the weak economy is a result of too much debt. Also, bubbles always burst, and fundamentals win in the end.

“Unless we change direction, we are likely to end up where we are headed.”
–Chinese proverb

Recently, more so than I can remember from the past, attempts to make the “stock market” more than what it is, appear to be a daily occurrence. And, efforts to manipulate the market seem to be at all time highs. The stock market represents a marketplace for investors to purchase and sell stock. One or more indices are frequently used as a proxy for the stock market, such as: the S&P 500 (500 large company stocks), the DOW (30 large industrial stocks), or the Russell 2000 (2000 small to mid-size companies). The prices of the individual stocks determine the index value. Prices should represent the present value of a long-term stream of cash flows. Unfortunately, as happens at the end of bubble cycles, prices have become far detached from earnings or revenue.

According to economist Lance Roberts, corporate profits have not grown since 2011 (see the chart below), yet the market skyrocketed.

The economy has become a political hot potato in a highly divisive political environment. One side hoping to replace the president in the next election highlights the potential for a recession. The other side, hoping to retain the president, claims the economy is booming. As proof of such economic success, they point to the stock market. When the stock market plunges, as it did last Wednesday, over 800 points down on the DOW, attempts are made by both sides to make hay. One side says, “see we are near a recession”; the other points to the Federal Reserve and says, “they aren’t doing enough and should drop interest rates”. For almost a decade, actions by central banks have managed to keep the stock market bubble propped-up.

It has reached a point where investors are understandably confused. Who should they believe? And that is the point of these Updates, which are meant to provide an apolitical analysis of the data. Hopefully, they shed some light on what is really occurring.

I have stated in many prior missives, the two biggest obstacles to higher economic growth are debt and demographics. Our economy relies on debt-financed consumption. But what happens when consumers are maxed-out on debt? How much debt can be piled-on to continue the consumption train? And, what happens to the massive debt balances if interest rates ever rise?

Lance Roberts summarized the current state of affairs as follows:

• Economic growth has weakened globally
• Corporate profit growth has turned negative.
• Tax cuts are fully absorbed into the economy
• Interest rates are signaling there is something “broken”
• Yield curves are negative as “deflationary” pressures are rising
• All of which is leading to rising recession risk.

Mike (Mish) Shedlock writes a blog on the global economy called Mish Talk. Recently, Mish wrote about the debt issues. I will share some of his data, which some readers might recognize from prior Updates.

The following graph was prepared by Mish using the same St. Louis Fed FRED database I use for economic data.

According to Mish’s blog, the following are key points:

The chart below provides a comparison of debt and GDP today to the 2008-2009 Financial Crisis.  Notice since then, Real GDP Growth has barely grown relative to total debt. 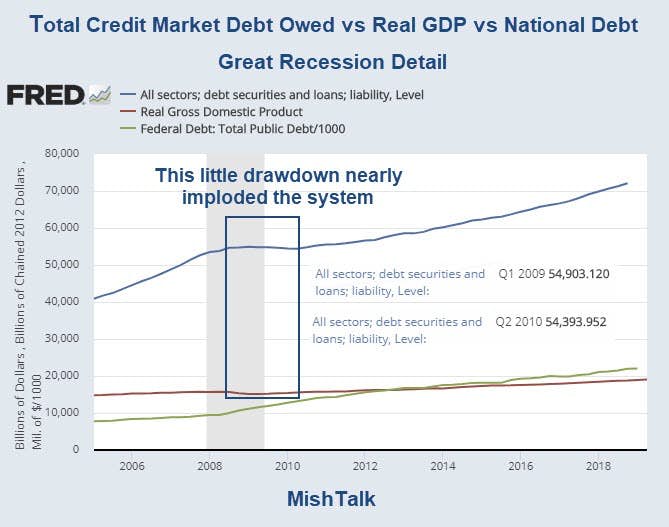 Mish’s final comments included: “We are very close to the tipping point where the Fed can no longer force any more debt into the system. That’s the clear message from the bond market.”

In the meantime, with each downturn in the market come calls for the Fed to do more. A new Quantitative Easing (QE) program and even the possibility of negative interest rates in the U.S. have been discussed. Even today, Monday, President Trump stated the Fed should lower short-term interest rates by 1% and re-start QE. With each call for more Fed action, the algorithms initiate stock buying pushing the market up. Then, as weak economic data is revealed showing a slowing economy, the market falls.

Expect more attempts to manipulate the “stock market” as poor economic data is disclosed. These distortions lead to increased market volatility, as well as greater risk of loss. It is important for investors to try to sift through the chatter and examine the actual data. Fundamentals always win in the end.