What Happens During Manias?

Since 1990, the monetary base has grown from around $300 billion to close to $5.5 trillion. (See first graph) The massive amount of liquidity provided through the Federal Reserve Bank’s (Fed) monetary policy has helped fuel enormous bubbles in all types of assets. One of the best examples is Bitcoin, which in 2015 traded at $300 per coin and has recently traded at over $60,000 per coin. (see the fourth graph) And to top it all off, what started as a joke in 2021, Dogecoin (Dog-E-coin) is now valued more than Ford Motor Company. (See the story included from The Wall Street Journal.) Manias draw many into the “get rich quick” mentality.  At this stage, fundamentals are ridiculed as “old school.” I only hope today’s investors can fathom what will occur during the last phase of a bubble.

“As a rule, Panics do not destroy capital; they merely reveal the extent to which it has been previously destroyed by its betrayal into hopelessly unproductive works.”
–John Stuart Mill

Since 1990, the monetary base has grown from around $300 billion to close to $5.5 trillion.  As can be seen in the graph below from the St. Louis Federal Reserve’s FRED database, the rate of growth accelerated in 2008 during the Financial Crisis.  After a slight decline from October 2015 through September 2019, the rate of change became nearly vertical.

The massive amount of liquidity provided through the Federal Reserve Bank’s (Fed) monetary policy has helped fuel enormous bubbles in all types of assets.  As shown in the anatomy of a bubble below, by the end of the Mania phase most of the public has been lured into extremely over-priced assets.

At this point, fundamental analysis is not only ignored, but ridiculed.  Only old stodgy, out-of-touch investors would point out such outdated concerns such as price-to-earnings ratios or standard deviation.  The fact that certain “assets” are merely computer creations with nothing of value backing them is merely a small detail easily rationalized.  Prices soar because things are now different than in the past.  And as long as the Fed can feed the beast, prices will continue to rise.  Price discovery is old school. 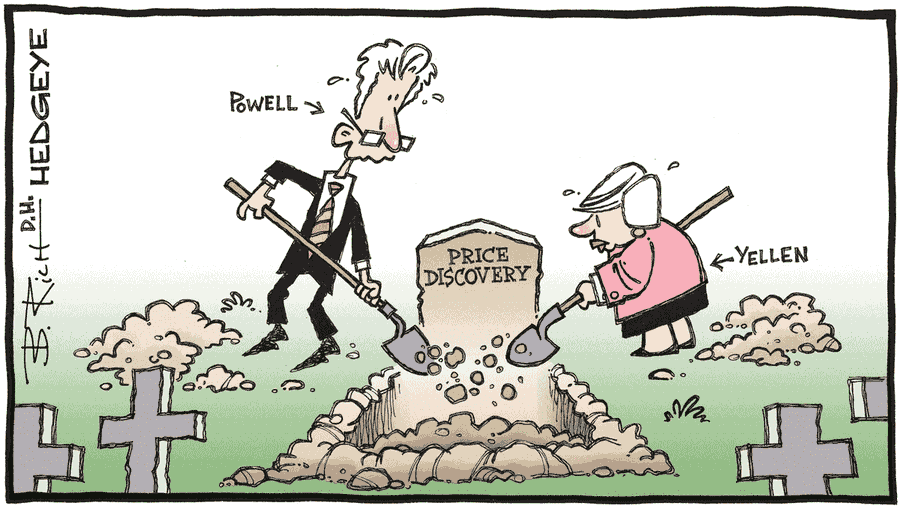 A prime example is Bitcoin.  At the start of 2015, Bitcoin was trading close to $300 per coin.  Today it has traded over 200 times that price.  These are the actions seen during manias.  Some argue that Bitcoin will take over as a digital currency replacing the dollar.  A viable currency cannot survive with daily price fluctuations sometimes exceeding 15%.  The Fed nor the Federal Government backs Bitcoin.  There is nothing of physical value backing this “cryptocurrency.”  And, now there are many alternative cryptocurrencies hitting the market. 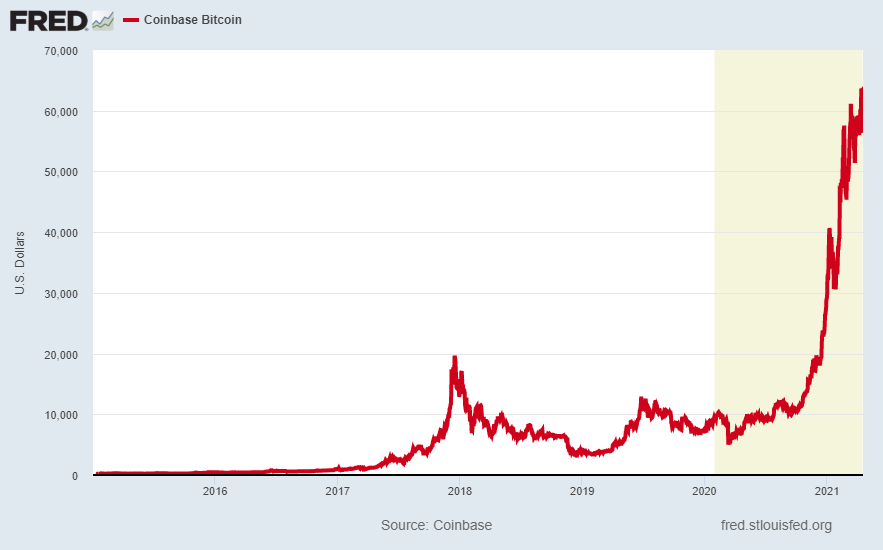 When too much liquidity has been injected into the economy during the Mania phase, irrational things begin to appear.  Those who can remember the late 1990’s, know that all it took was adding “.com” to the name of a company and the stock price would soar.  Revenues and profits were optional.  In 2021 a cyptocurrency called Dogecoin (or Dog – E – Coin) was created as a joke.  As written in The Wall Street Journal,

“Dogecoin’s rise from a quirky meme into a widely traded asset worth over $50 billion—more than Marriott International Inc. or Ford Motor Co. —is the latest act of financial alchemy by rapidly moving individual investors who have used access to no-fee trading platforms and a wave of government stimulus money to transform markets over the past year. […]

This time, dogecoin’s buyers have gone a step further, turning what was meant as a parody into a real asset, providing some traders who piled in early with unimaginable gains. The latest stage of the frenzy centers on Tuesday having been deemed ‘Doge Day’ in online forums, a loosely organized bid to push the price of the cryptocurrency to $1, from about 39 cents on Monday and less than a penny in January.

Both episodes underscore the scale and potency of the current retail-trading environment, in which organized efforts in online communities can make a surprisingly large impact on market prices. They also reflect expectations that prices will continue rising, and as such they embody risks that these sudden fortunes will be wiped out when the winds of the markets shift.”

At this stage, companies of all stripes decide they too can “go public” and hit the motherload.  Notice the surge in U.S. equity offerings below. 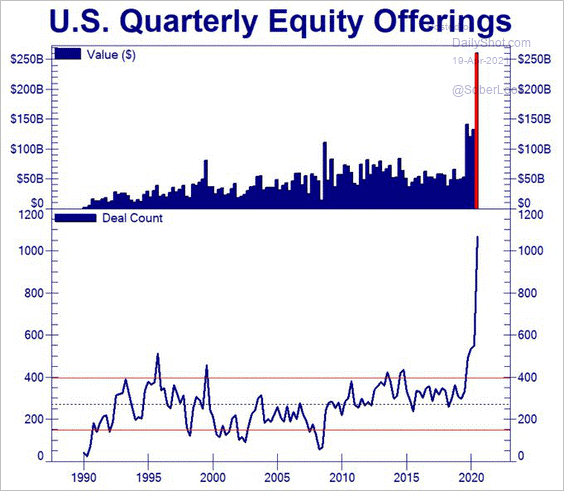 Last week, well-known hedge fund manager David Einhorn provided the details of a single delicatessen in New Jersey with sales over the past two years of just under $36,000 trading in the Over-the-Counter market at around $14 per share.  This gave the deli a market cap of around $100 million.  If investors are buying fake cryptocurrencies and assigning a $100 million value to a small deli, why wouldn’t everyone want to go public now?  Time to strike it rich!

Even real companies are trading at absurd prices.  The S&P 500 Index is trading at 3.09 times revenue and 37.5 times average earnings.  These prices have only been witnessed at bubble peaks.

These examples illustrate what occurs when Mania has taken over.  Notice in the anatomy of a bubble graph, every bubble in history has also experienced the last phase or the “Blow Off” phase.  I only hope today’s investors can fathom what will occur during the last phase of a bubble.