Will Additional Stimulus Allow a “Return to Normal”?

Year-to-date earnings through September 30, 2020, are expected to plunge 43% compared to the same period last year; however, the S&P 500 Index is up about 7% this year.  Ongoing hope of Federal stimulus continues to fuel this bubble in stock prices.  Market volatility is rising with the continual roller coaster of news of possible stimulus deals.  With the national election only two weeks away, both Democrats and Republicans have been reluctant to come to agreement on a stimulus package.  Exacerbated by the pandemic, corporate bankruptcies and total public debt have skyrocketed (see first two graphs below).    Although prices may continue to rise based on speculation of Federal stimulus, valuation extremes always revert in the long run.  Current long-term “buy and hold” returns are projected to be the lowest in history.

Please proceed to The Details to see if a “return to normal” is possible.

Utilizing data from the S&P Dow Jones Indices website, year-to-date earnings through September 30, 2020, are expected to plunge 43% compared to the same period last year.  At the same time, the S&P 500 Index is up about 7% this year.  Make sense?  Of course not, but the ongoing bubble in stock prices continues, on hopes for more Federal stimulus funded with more printed money from the Federal Reserve Bank (Fed).  The stimulus packages resulting from the Great Recession – considered the worst crisis since the Great Depression – totaled less than $1 trillion.  Any new stimulus plan passed today will stack on top of the almost $3 trillion package enacted earlier this year.  Oh, and election day is two weeks away.

For months, Democrats and Republicans have attempted to negotiate additional stimulus as the economic impact of the pandemic has been far worse and lasted longer than anyone had anticipated.  Unfortunately, when Congress needs to act in the middle of an election year, it becomes difficult to come to a consensus on what the “right” thing to do is.  The dilemma is real; millions have lost their jobs, some temporarily and some permanently.  Many corporations are struggling, especially in the hospitality and service industries.  Bankruptcies are soaring as seen in the chart below.  And at the same time debt is at crisis-levels. 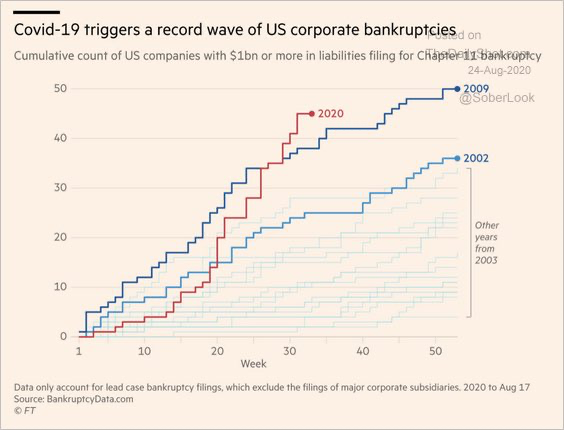 Before adding any additional stimulus, the Federal debt as a percentage of the economy has skyrocketed to over 135%.  Will Congress begin to take this seriously?  The U.S. is at a critical juncture as to what the role of the Federal government should be during a human, economic and financial crisis. How much financial jeopardy are leaders willing to subject the country in order to provide needed benefits? 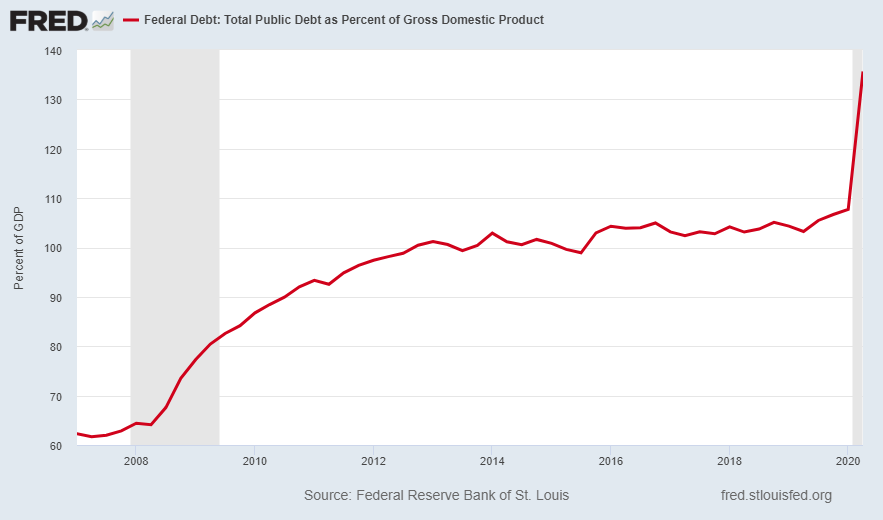 So, the debate rages on with continually changing deadlines and a stock market experiencing high volatility.  With every Tweet regarding potential stimulus, the stock market swings wildly.  The question remains:  if stimulus is provided would that justify higher stock prices?  Short-term speculators could see a boost in prices, yet in the end valuations provide a good indication of what will result in the long run.  Economist John Hussman has performed extensive research examining valuation levels compared to subsequent long-term returns.  His graph below illustrates a methodology with a high correlation of valuation and actual subsequent returns.  In this example, he indicates that a balanced portfolio consisting of 60% equities, 30% Treasury Bonds and Notes and 10% T-bills, at current valuations is projecting a 12-year average annual return of -0.91%.  This is the most negative 12-year projected return in history based upon his analysis. 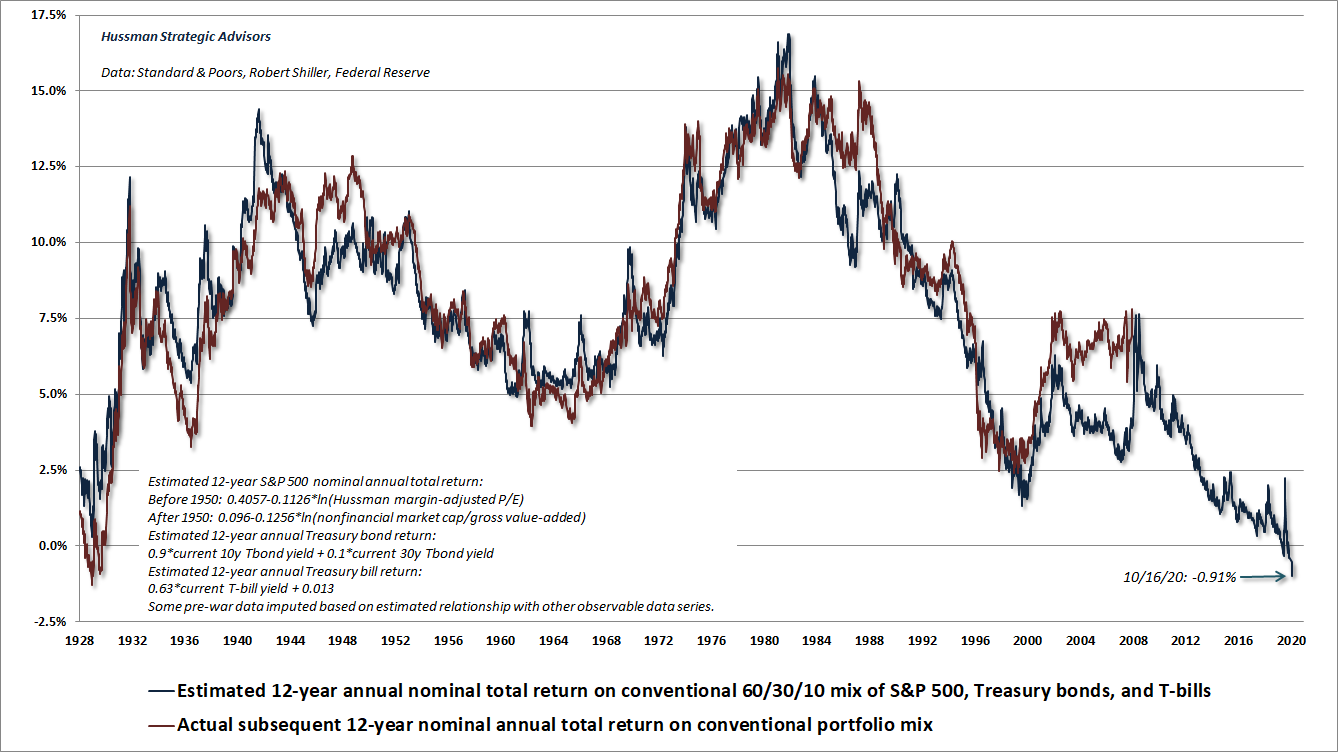 With the foundation established, how much stimulus should the Federal government enact and when?  John Hussman stated the following in his recent Market Comment:

“Ultimately, the speculation drives prices high enough, relative to likely future cash flows, to virtually ensure zero or negative long-term returns on even those assets. But here’s the irony: everybody is happy. All anybody cares about is the ink on a piece of paper, or the pixels on a screen, that tell them that they own something of worth. Never mind that if they hold those assets over the long-term, they will earn nothing more. Never mind that in order to sell those assets, they will require someone else to step up to hold the bag. Never mind that if enough people attempt to sell without those greater fools absorbing the supply at nearby prices, a great deal of that paper wealth will vanish into thin air.

And when that collapse comes, as we observed most recently in 2008-2009, the other irony is this: everyone will look to the government and the Federal Reserve to save them: by making money cheap. […]

Once interest rates hit zero, so does the IQ of Wall Street.”

Poor prior decisions have left the country in an untenable situation.  Help is needed for families and small businesses, yet the Federal government is effectively bankrupt and is printing money like it is going out of style.  The amount of additional stimulus likely to come will merely postpone the pain for a few more months as the amount of debt in the system will prevent a sustainable “return to normal.”