Is Trouble Brewing at European Banks?

A recent article in The Wall Street Journal entitled “European Banks Consider Mergers for Survival” describes how banks are exploring mergers due to a decade of weak returns. It goes on to explain how the banks have survived due to government policies and stimulus programs created to counter the effects of the pandemic.  However, in the graph below one can see the Stoxx Europe 600 Banks index is down close to 40% this year.  On top of this, on Monday the European stock markets incurred heavy selling led by their banks.  According to an article in Zero Hedge, a report published by Buzzfeed of thousands of leaked SARS – suspicious activity reports – is to blame.  These reports are supposed to alert authorities of potential money laundering.  If big banks are turning a blind eye to money laundering on top of all the COVID-19 effects, it could spell trouble.  Due to the interconnectivity of the international banking systems, this trouble would not be limited to European banks.

“Banking is very good business if you don’t do anything dumb.”
–Warren Buffett

Since the Financial Crisis, European banks have struggled.  The European Central Bank (ECB) together with European national central banks have maintained extremely loose monetary policy for a decade.  They have worked with national governments to keep European banks from failing.  Interest rates on sovereign bonds have negative nominal (before inflation) interest rates in many countries.  Now the banks are more challenged than ever.

An article in The Wall Street Journal entitled “European Banks Consider Mergers for Survival” stated, “Around the region’s capitals, banks are exploring mergers after a decade of weak returns.  They are drawing plans on how they can face a prolonged era of low interest rates, a gloomy economic outlook and souring loans that are expected to rise as borrowers struggle to keep their jobs and businesses.”

The article went on to state:

“So far this year, European banks have posted relatively stable results, giving the impression they are weathering the severe economic contraction well.  But that is mainly because governments are sustaining the economies by paying companies to keep people in their jobs and getting banks to give borrowers payment breaks on their loans.  Once those programs are lifted, analysts expect a wave of defaults that could push weaker banks to the brink of collapse.

That is particularly true for countries more severely hit by the pandemic, including Spain and Italy, or whose governments don’t have the money to support the economy, such as Greece.  In turn, banks’ depressed share prices make it hard for them to raise more capital from investors.  The Stoxx Europe 600 Banks index is down close to 40% this year.  European banks are trading at a fraction of their net worth, a sign investors doubt their ability to survive or achieve sufficient profitability.” 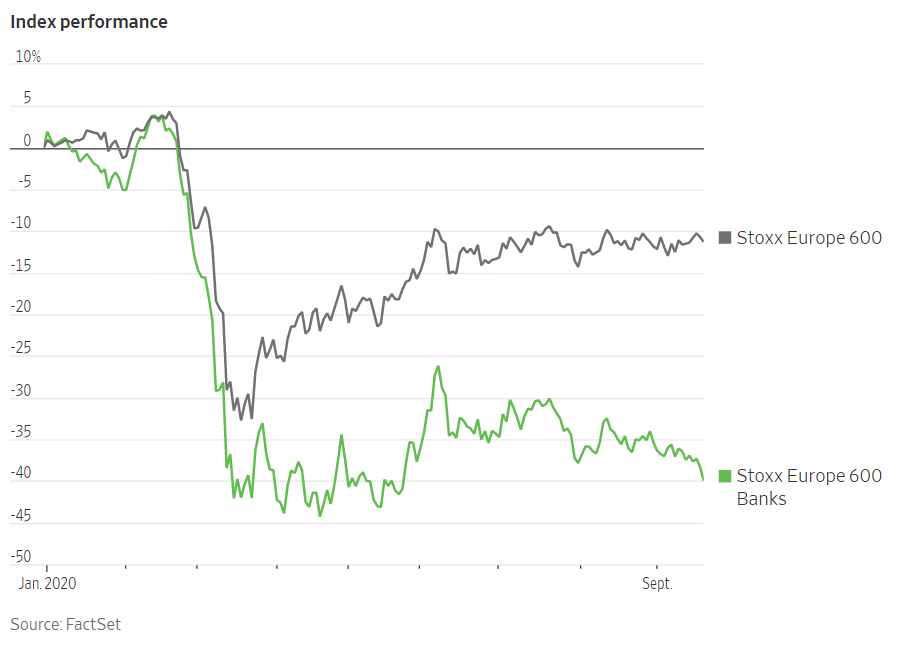 Monday, the European stock markets incurred heavy selling led by their banks.  The German DAX index was down 4.4%, the U.K. FTSE index dropped 3.4% and the French CAC index fell 3.7%.  The plunge in European markets, especially the banks, carried over into the U.S. markets.

According to an article on Zero Hedge (ZH), “Shares of the world’s biggest banks are tumbling in premarket trade Monday morning after Buzzfeed last night published a lengthy report based on a cache of thousands of leaked SARS – suspicious activity reports – filed by the world’s biggest banks, including JP Morgan, and Deutsche Bank which were both prominently featured.”

In another ZH article it was written, “In what looks like one of the biggest leaks of private banking records since the Panama Papers, Buzzfeed News has published a lengthy investigation into how the world’s biggest banks allow dirty money from organized criminals, drug cartels, and terror groups like Al Qaeda and the Taliban to flow through their networks.”

The following is an excerpt from the report via ZH,

“These documents, compiled by banks, shared with the government, but kept from public view, expose the hollowness of banking safeguards, and the ease with which criminals have exploited them. Profits from deadly drug wars, fortunes embezzled from developing countries, and hard-earned savings stolen in a Ponzi scheme were all allowed to flow into and out of these financial institutions, despite warnings from the banks’ own employees.

Money laundering is a crime that makes other crimes possible. It can accelerate economic inequality, drain public funds, undermine democracy, and destabilize nations — and the banks play a key role. ‘Some of these people in those crisp white shirts in their sharp suits are feeding off the tragedy of people dying all over the world,’ said Martin Woods, a former suspicious transactions investigator for Wachovia.

Laws that were meant to stop financial crime have instead allowed it to flourish. So long as a bank files a notice that it may be facilitating criminal activity, it all but immunizes itself and its executives from criminal prosecution. The suspicious activity alert effectively gives them a free pass to keep moving the money and collecting the fees.

The Financial Crimes Enforcement Network, or FinCEN, is the agency within the Treasury Department charged with combating money laundering, terrorist financing, and other financial crimes. It collects millions of these suspicious activity reports, known as SARs. It makes them available to US law enforcement agencies and other nations’ financial intelligence operations. It even compiles a report called “Kleptocracy Weekly” that summarizes the dealings of foreign leaders such as Russian President Vladimir Putin.

What it does not do is force the banks to shut the money laundering down.”

Banking today is not carried out in isolation.  The banking industry is interconnected in many ways.  The failure of a large European bank would have a significant impact on the U.S. financial system.  Now, in addition to decade-long weak economic conditions inspiring zero and even negative interest rates, banks are faced with the potential for massive loan defaults due to COVID-19 related effects.  And it has now been reported that some of the largest financial institutions in the world may have been assisting, or turning a blind eye, to money laundering and other illicit behavior.  The consequences of which are currently unknown.

Central bankers don’t seem to understand the damage being done to banks through zero percent and negative interest rates.  Simply stated, banks make money through the spread between interest earned on loans made and interest paid to depositors.  When interest rates are near zero percent, the potential spread is reduced if not eliminated.

Keep an eye on European bank stocks as trouble is brewing, and it won’t be restricted to Europe.