When is the Hole Too Deep?

Subsequent to the 2008 Financial Crisis, the Federal Reserve Bank dropped interest rates to near zero percent and created money in attempts to stimulate the economy.  Instead of being used for business investment and expansion, the printed money created asset bubbles everywhere.  Recessions are a necessary part of the business cycle as they allow debt to be restructured, often through defaults, and asset prices adjusted back to reasonable levels based upon economic fundamentals.  However, the Fed appears to want to avoid all cycle downturns.  Currently, they have exploded their balance sheet to almost $7 trillion (see first graph), although the velocity of money continues to slide lower (second graph).  Massive bail-out funding has pushed the U.S. National Debt to over $26 trillion.  Corporations have also added debt with almost 20% having debt service costs greater than profits (see chart below).  All of this taking place as the National Bureau of Economic Research stated a recession started in February of this year.  Debt based solutions act as an anchor to future growth.  By trying to avoid recessions, the Federal Government and Fed are digging a hole that will be difficult to escape.

Please proceed to The Details for the complete picture.

“When you find yourself in a hole, quit digging.”
— Will Rogers

After a decade of artificial interest rate suppression and massive programs by the Federal Reserve Bank (Fed) to create money, the excesses are now more than apparent.  Instead of the created funds being utilized for business investment and expansion, they were funneled into the asset markets creating huge bubbles everywhere.  The near zero percent interest rates were used to incentivize record levels of borrowing, mostly for non-productive purposes.  Recessions are a necessary part of the business cycles as they allow debt to be restructured, often through necessary defaults, and asset prices adjusted back to reasonable levels based upon economic fundamentals.  However, the Fed seems to think they can avoid the pain and necessary restructuring by pushing the pedal to the metal.  The RPM (revolutions per minute) gauge is now far into the red and the engine is making funny noises, yet the Fed screams “We can do more!”  The Fed is comprised of intelligent individuals, which makes their cognitive dissonance even more shocking.

The chart below shows total Fed assets.  This number was around $800 billion prior to the Great Recession.  The expansion to $4.5 trillion was considered extreme.  Compared to recent actions, prior measures seem mild.  The chart below has turned almost vertical.  The only thing “lifting-off like a rocket” is the size of the monetary base.

Yet, even with such radical policy moves, the velocity of money (how often money changes hands) continues to slide to near record lows.  For now, this indicates inflation, excluding asset prices, is not imminent.  See the chart below. 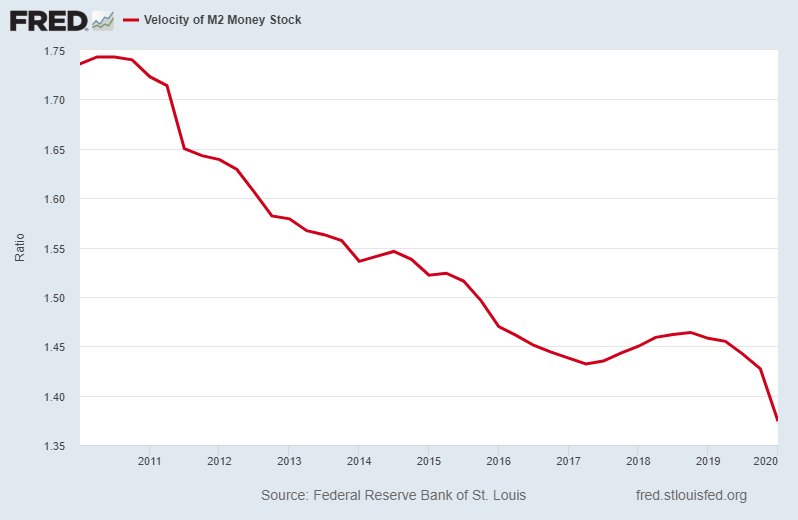 The Fed is scared.  As such, instead of attempting to manage the economic “reset”, they are trying to avoid it by piling on more debt on top of the existing debt mountain.  The National Debt has now surpassed $26 trillion after soaring over $1 trillion in less than two months.  Despite the surge in debt, politicians are calling for trillions more in bail-out funds.  I expect the National Debt will reach $30 trillion within a couple of years.

Additionally, instead of attempting to reduce debt and shore-up their balance sheets, corporations have increased debt at an even faster pace – despite attaining record debt levels prior to the current recession.  The following graph shows the recent surge in corporate debt.  Notice the ramp in debt on the far-right side of the graph.  The second graph displays the rising percentage of corporations with debt service costs exceeding their profits. 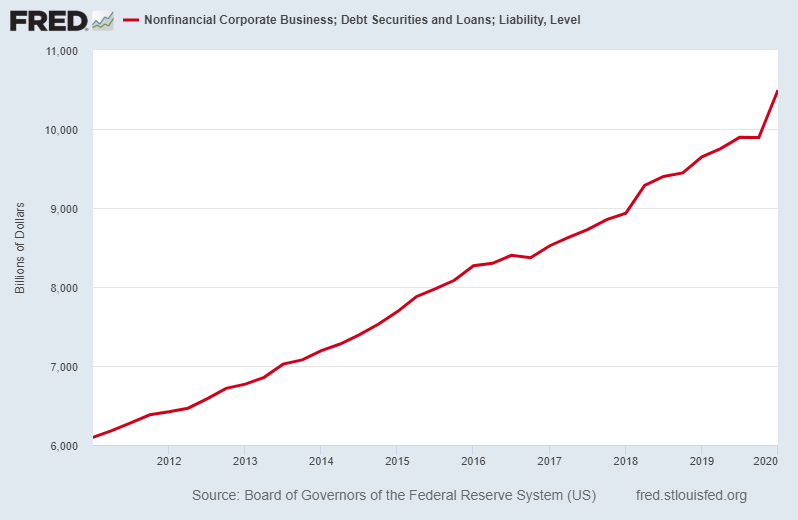 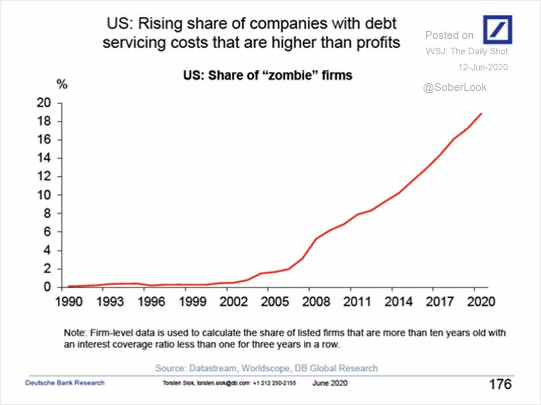 COVID-19 struck as the economy was weakening, causing a perfect storm of sorts for economic growth.  The National Bureau of Economic Research (NBER) stated a recession started in February, which was before the major impact of the coronavirus.  Shuttering the economy sent growth plunging.  The Atlanta Fed GDPNow forecast for the second quarter estimates annualized growth of -48.5%.  The New York Fed’s Nowcast model estimates third quarter growth at -12.5%.  These are regional Fed models and are not the official Fed forecasts.

Although many pundits are projecting a “V” shaped recovery, it appears even the Fed doesn’t believe that to be the case.  In their press conference last week, Chair Jerome Powell stated the Fed plans to keep interest rates near zero percent through 2022.  If they truly believed the economy would bounce right back, the combination of a “soaring” economy with the increased monetary base would cause inflationary concerns.  This in turn would create the possible need for increasing interest rates.  Announcing no intention to raise rates for over two years screams concern for future economic growth.

The following chart illustrates the Conference Board’s Leading Economic Index (LEI).  Leading indicators are used to predict what to expect in the economy. 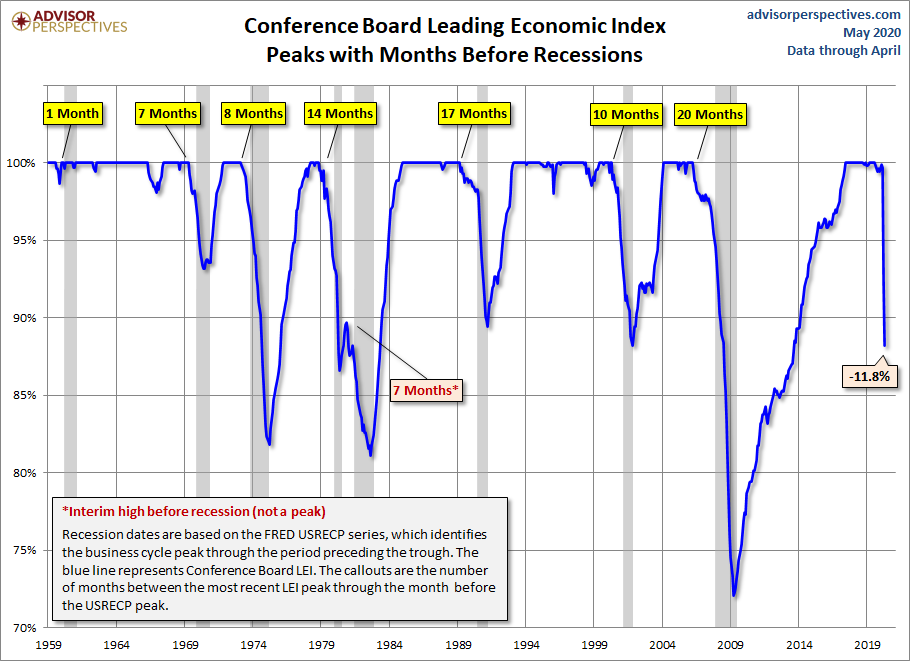 According to the Conference Board,

“‘In April, the US LEI continued on a downward trajectory, after posting the largest decline in its 60-year history in March,’ said Ataman Ozyildirim, Senior Director of Economic Research at The Conference Board. ‘The erosion has been very widespread, except for stock prices and the interest rate spread which partially reflect the rapid and large response of the Federal Reserve to offset the pandemic’s impact and support financial conditions. The sharp declines in the LEI and CEI suggest that the US economy is now in recession territory.’

‘Business conditions may recover for some sectors and industries over the next few months,’ added Bart van Ark, Chief Economist at The Conference Board, ‘But, the breadth and depth of the decline in the LEI suggests that an imminent re-opening of some sectors does not imply a fast rebound for the economy at large.’”

I have discussed in prior newsletters the impact debt has on economic growth.  The recipe to solve economic slowdowns has always involved more debt.  The structural debt levels have reduced the ability to achieve prior rates of growth.  The current stratospheric increases in debt are digging a hole which will be difficult to escape.  The Fed’s position when implementing unprecedented monetary policy after the Great Recession was that the actions were temporary and would be reversed once the economy recovered.  However, the increase in debt prohibited the economy from recovering to prior rates of growth.  And, the slightest reversal in interest rates and Fed assets sent the economy reeling causing an immediate return to debt-based solutions.  The chart below from economist Lance Roberts illustrates the long-term annual economic growth rate at 3.2% prior to the Great Recession.  After this recession, the long-term rate dropped to around 2.2%.  Now, the estimated future growth rate is even lower, in the 1% range.  If debt continues to rise at unprecedented rates as hinted by the Fed and the Federal Government, there is no telling what realistic future economic growth rates will look like.

The short-sighted debt-based solutions being implemented will weigh-down future economic growth like an anchor.  Recessions are a time when “bad debts” default or are restructured and assets return to appropriate levels based upon economic fundamentals.  The continuous boost to debt in attempts to ward-off the needed reset does not solve the problem.  The current “solutions” merely dig a deeper hole.  Unfortunately, the rate of growth of debt far surpasses the potential rate of growth of the economy.  As such, the partnership between the Fed and the Federal government is creating a hole which is becoming deeper and deeper.  At some point the hole becomes impossible to escape.  A new approach is needed before it is too late.