How Likely Are Negative Interest Rates?

The Federal Reserve Bank controls the very short-term Federal Funds Rate; however, longer-term interest rates tend to track economic growth.  In the second graph in The Details, one can visually see the correlation between economic growth and the yield on the 10-year Treasury Note.  And now, the COVID-19 crisis has slammed on the brakes of the already low U.S. long-term economic growth rate of about 2%.  Short-run economic numbers are depressionary.  The stock market, now completely detached from fundamentals, is betting on a miracle recovery.  Once investors focus on earnings and realistic economic numbers, there could be a panic in the market which will send Treasury yields lower (and possibly negative).  Negative interest rates turn the entire banking environment upside down.  Please proceed to The Details for the complete explanation on the possibility of negative interest rates in the U.S.

“The world is wrong side up. It needs to be turned upside down in order to be right side up.”
— Billy Sunday

The yield on the German 10-year Bund is -0.508% today, Monday, May 11.  The yield on the French 10-year Bond is -0.005% and the Japanese 10-year Bond turned slightly positive at 0.015%.  Speculation has been rampant for some time as to whether the U.S. will join the party with negative interest rates.  There seems to be some confusion even among certain “experts.”  The controversy surrounds whether the Federal Reserve Bank (Fed) will lead the U.S. into the netherworld of negative rates.  However, the Fed merely sets the very short-term Federal Funds Rate (FFR); it is the market which determines yields on outstanding debt instruments.

Currently, the yield on 10-year U.S. Treasury Notes has fallen to a mere 0.72%.  The chart below illustrates the drastic plunge in rates from a peak of almost 16% in 1980. 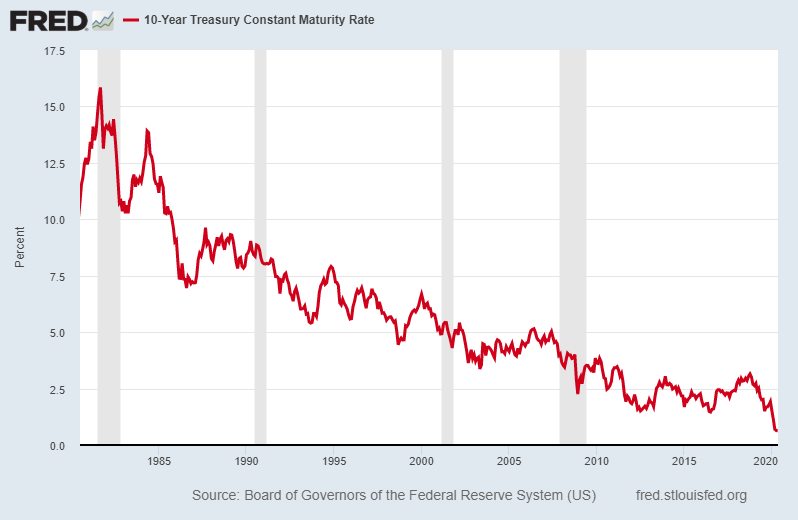 Although the Fed has dropped the FFR to a range of 0.0 – 0.25%, they have indicated they do not plan to go negative at this time.  However, that does not mean the market will not do it for them.  In fact, in March of this year short-term Treasury Bills briefly traded at negative yields.  As recently as last week, the 2-year Treasury Note traded at a low 0.11%.

The COVID-19 crisis has taken an overleveraged economy which was growing at a real annual rate of only about 2% and slammed on the brakes.  Additionally, massive amounts of new debt are being layered on top of a debt-to-GDP ratio which was already over 100%, pushing the ratio to extremes likely to hit at least 135%.  Moreover, the huge jump in the unemployment rate to about 15% in April, with estimates it could reach as high as 20-25%, is adding to the deflationary environment.  Weak demand for goods and services, overcapacity, heavy expected debt defaults and a strong dollar are all adding to deflationary forces.  The core Consumer Price Index (CPI) is likely heading below zero, or deflationary, and the headline number could fall even further.

The Atlanta Fed GDPNow model is projecting second quarter GDP growth of -34.9%.  Yes, that is a negative number.  There is no question that this level of negative growth combined with a possible 25% unemployment rate are depressionary numbers.  The question that remains is whether the economy lingers in a depression, or if once most companies re-open it bounces up to recessionary levels.  The stock market seems to be betting on a miracle.

The stock market is presently more detached from reality than any time over the past decade.  At no point over the prior 10 years was the U.S. in a depression.  The market is ignoring economic fundamentals and focusing strictly on the trillions in new liquidity created by the Fed.  However, once investors refocus on earnings and realistic economic growth numbers, a panic flight to safety should ensue.  This typically manifests itself through the sale of stocks and purchase of Treasury securities.  This flow pushes Treasury prices higher and their yields lower.  With the 10-year Treasury at 0.72%, it would not take much to push yields into negative territory.

In a negative interest rate environment, borrowers are rewarded, and savers are punished.  This backwards situation not only penalizes savers but puts pressure on banks.  Banks make money on their interest margin, or the difference between what they charge borrowers versus what they pay depositors.  Negative interest rates upset the natural state of banking.  The following is from an article in Forbes entitled, “Getting Ready for Negative Interest Rates.”

“A subtle but significant effect of zero-to-negative interest rate policy comes through the banking sector. In this environment, banks face asymmetrical effects of rate cuts across their assets and liability side. On the asset side, as expected, the borrowers demand and get lower interest rates. But on the liability side, it is extremely hard, if not impossible, for a bank to pass on negative interest rates to their retail depositors. To be sure, banks can and do charge some fees to their depositors. But it is impractical to pass on negative, or even zero, rate completely to the depositors. The cost of serving retail depositors becomes exceptionally high in a time like this.

As a result, banks that are funded mostly with retail deposits are relatively worse off under a zero-to-negative interest rate regime. Their cost of funds does not go down by as much as the interest rates on their loans do. Profit margins are squeezed, and banks look for ways to compensate for this by changing their business strategy, either by rationing the supply of credit to borrowers or by changing the composition of borrowers they lend to.”

Economic forces are putting downward pressure on interest rates.  Furthermore, the upcoming flight to safety will also add downward pressure on Treasury security yields.  Even though the Fed might hold-off on dropping the FFR to negative territory, the market will likely push other rates negative.  The deleterious impact of negative rates will be felt by savers as well as financial institutions.