Is the Propaganda in Full Force?

It seems the President, the Federal Reserve Bank and politicians are touting record high stock prices as a reflection of a great economy. However, the GDP number released last week was only 1.9%, which is below average growth over the last ten years, and over one-third below the long-term trend. Also, domestic investment is down, and the jobs number released Friday was half of that seen a year ago. Manufacturing numbers released are contractionary and near recessionary. And finally, the U.S. National Debt passed 23 trillion last week. The stock market is not reflecting the underlying economy, and thus includes much risk of loss. Unfortunately, the propagandists are fooling the masses. Please proceed to The Details

“The point of modern propaganda isn’t only to misinform or push an agenda. It is to exhaust your critical thinking, to annihilate truth.”
–Garry Kasparov

The President and financial media are back to touting “record high” stock markets. Last week they even tried to spin dismal economic data into “good” results to support outlandish stock valuations. This morning (Monday) the rallying cry returned to the absurd “optimism” about a China Trade deal…Phase 1 that is. Has anybody seen what Phase 1 includes? It doesn’t seem to matter since the market is moving on “optimism.” Apparently, optimism trumps weak economic results and falling corporate earnings.

Wilbur Ross, U.S. Commerce Secretary said this weekend, “…licenses for U.S. companies to do business with China’s Huawei Technologies, Inc. will be coming ‘very shortly’ and [he] expressed optimism about a U.S. China trade deal” according to MarketWatch.

Regarding the “optimistic” news, economist Lance Roberts tweeted this morning, “This is great. #Trump starts trade war to #Stop #China #Stealing #US #Tech. Trump ends it as China promises to buy same amount of Ag products as in 2017 (pre-trade war). Trump giving licenses to sell tech to Huawei which was the primary problem. China wins.”

In this missive I will review recent economic data releases and illustrate the insanity of record high stock valuations.

Last week we saw the Bureau of Economic Analysis (BEA) release the advance reading of GDP growth for the third quarter 2019. The result was an extremely low 1.9% real growth rate. Anyone watching television or reading tweets as the result was unveiled would have thought we had 4% or more growth. This was only accomplished with the recent reduction in “expectations” to 1.6%, allowing 1.9% to appear “good” by comparison.

A few years ago, the public was told that 3% real growth was around the corner, with the possibility of reaching 4-5%. (I debunked this forecast in numerous Updates.) 1.9% growth is over one-third below the long-term trend and in-line with post-Great Recession growth. Although, a sugar boost was provided in 2018 with the tax cuts, reality has returned.

Let’s think about this for a minute. It has been over 10-years since the Great Recession ended. The Fed produced over $3.7 trillion in liquidity; interest rates were lowered to zero percent, then raised to 2.25%, then lowered back to 1.5%. The Fed has once again expanded its balance sheet by injecting $261 billion in two months. After all of that manipulation, the economy continues to muddle along at sub-2% growth. And, the Atlanta Fed is projecting fourth quarter 2019 real growth at 1.1%.

One of the most important segments of GDP growth, private business investment, is now falling.

Next up for the propaganda machines was last Friday’s release of the jobs report. In similar fashion to the GDP report, “expectations” were lowered. So, when the announcement of 128,000 new jobs was made, the celebration of “better than expected” ensued. The creation of 128,000 jobs is nowhere near a “good” jobs number. Look at the trend growth rate in nonfarm payrolls below:

October’s job creation was about half of the 250,000 jobs created in October 2018 just before the market plunged almost 20%. Half the jobs this year and the market soars.

Now, I will summarize an assortment of recent economic and corporate announcements ignored by the propagandists:

• ISM Manufacturing Index is at 48.3. (Below 50 represents contraction.) Current levels are near recessionary.
• ISM New Orders equal 49.1, in contractionary territory.
• September Factory Orders were down 0.6% from prior month and down 3.5% year-over-year. This is the largest contraction since July 2016.
• Final Durable Goods Orders for September fell 1.2% from August and dropped 4.2% year-over-year.
• With 359 S&P 500 companies reporting so far, third quarter year-over-year earnings have fallen 1.33% according to Hedgeye Risk Management, LLC.

Regarding earnings, Bloomberg decided to determine the impact of stock buybacks on corporate earnings-per-share (EPS) growth. I have written numerous times about how corporations are repurchasing their stock in record amounts to boost the appearance of growth. According to Bloomberg’s research, 25% of reported EPS growth results strictly from stock buybacks, not revenue growth.

Another milestone overlooked by politicians and the media alike, the U.S. National Debt surpassed $23 trillion last week. Additionally, annual deficits are predicted to exceed $1 trillion for years to come. And, that is without recessionary stimulus or other Modern Monetary Theory (MMT) spending. And, global debt is three times higher than in 1999. 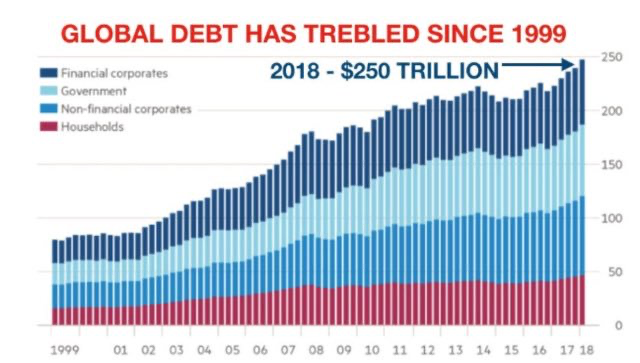 Our (anemic) economic growth has resulted only due to the enormous surge in debt. Current economic data results are weakening with many outcomes showing recessionary conditions. The only way for this “expansion” to continue is with unceasing growth in debt. However, revenue and income cannot sustain such growth.

Politicians and the media have allowed the public to be fooled with propaganda. It is a sad state of affairs when the average person only hears that the stock market is at record highs, and therefore assumes the economy is great. In reality, the market is priced at near-record valuations. The object of the propagandists is to keep the public in the dark as long as possible. Unfortunately, by the time they figure out what is going on, it will be too late. This is how all extreme bubble cycles have ended. The longer the deception continues, the greater the losses to be endured.